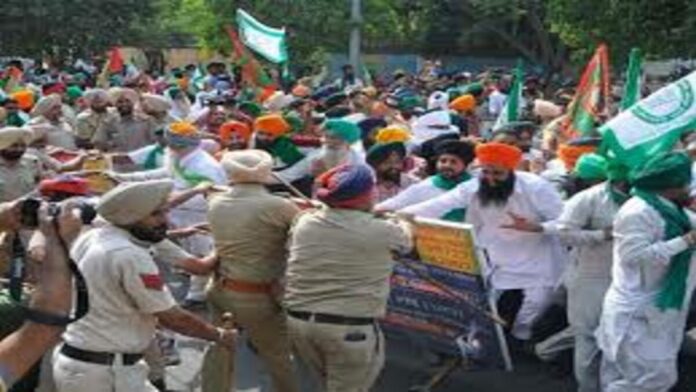 Today, a sizable demonstration took place in front of the Sangrur residence of Bhagwant Mann, the chief minister of Punjab, who is currently campaigning in Gujarat in preparation for the assembly elections in the western state. The police used batons to subdue the crowd when a fight broke out between the protesting farm workers and trade unions and them. Dramatic images from the scene showed the cops beating the flag-waving, slogan-yelling protesters.

The protesters also demand an increase in compensation for land acquisition, relief for farmers who have lost cattle to lumpy skin disease, and compensation for crop damage. Dalits should also have a 33% representation in village cooperative societies.

The earlier-advertised rally had begun in the morning.

Around 3 o’clock, the protesters began to march toward the Chief Minister’s residence after congregating near the Patiala Bypass. The cops halted them when they got close to the residential community where the Chief Minister rents a home.

Farmers who had staged a 19-day protest in October decided to end it after the government agreed to their written demands.

Mr. Mann is in Gujarat campaigning for the upcoming December 1 assembly elections.

His Aam Aadmi Party has asserted that the BJP is supporting the protests. AAP leaders claimed that the Gujarati government is under pressure as a result of the AAP campaign, and that this is their way of retaliating.

The BJP’s vote base among the Dalit community and the tribal population is reportedly expected to grow as a result of the backlash against the AAP among the Dalits.

The AAP administration has already been under fire for not enforcing Dalit reservation policies in government offices.