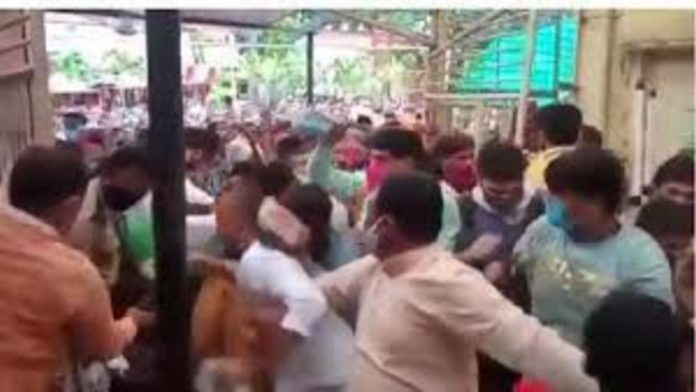 The incident occurred at the temple’s gate number four. The security perimeter finally broke way after much jostling and pushing, and people simply flooded in. Several of them collapsed to the ground, while others fell on top of them.

A video of the incident shows police officers being overpowered, as well as worshippers engaging in physical violence.

The Mahakaleshwar temple is one of Lord Shiva’s 12 Jyotirlingas. It reopened last month, but only for people who had gotten at least one dose of Covid vaccination or had a 48-hour RT-PCR test report.

Between the hours of 6 a.m. and 8 p.m., up to 3,500 worshippers are allowed to enter the premises. There are seven two-hour time slots available, each with a capacity of 500 people.

VIPs like Uma Bharti and Mr Chouhan, however, decided to visit the temple with their families on Monday. According to temple officials, this made things even worse for the worshipers and the administration.

Today was an exception, according to Ujjain District Collector Ashish Singh, and normalcy would resume on Monday.

“We will sit and plan for next Monday. Covid protocol cannot be followed in the kind of free-for-all we had today. There were also too many people in one go. We will revise the plan. We will ensure social distancing,” Mr Singh said.

Riya Kumari, a Bihar school student, posed the question in an exclusive interview with a news agency on Thursday. "If politicians can spend millions...
Read more
SPOT LIGHT

More than 190 apps have been discovered on the Google Play Store that are infected with this Trojan, according to Kaspersky. These infected apps...
Read more
SPOT LIGHT