The visit of Union Home Minister Amit Shah was postponed due to an IED blast near Israel embassy in Delhi. 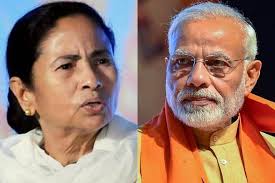 Bengal Chief Minister Mamata Banerjee had called a meeting of core committee members a day before Union Home Minister Amit Shah’s visit to Kolkata on January 30 in which many rebel leaders from TMC were expected to join BJP.

In the meeting she briefed the core committee members about the approaches to be taken to deal with the party dissidents and to clear the names of nominees of the candidates for the upcoming Bengal assembly polls.

However, dissidence in politics and parties is not any surprising thing but an influx of rebels in TMC later joining BJP has given a wake-up call to Mamata. She did not pay a much heed to the problem but now as she thought of BJP’s win on 18 Lok Sabha seats has now signalled her to save her party ahead of the elections.

The TMC MLAs who were expected to join BJP in Amit Shah’s presence include Laxmi Ratan Shukla and Rajib Banerjee, both who have resigned from Mamata’s cabinet recently.

However, the visit of Union Home Minister was postponed due to an IED blast near Israel embassy in Delhi.

Two MLAs Prabir Ghoshal and Baishali Dalmiya are likely to follow suit against the party as Baishali got expelled from the party and Ghoshlal was issued show-cause notice. TMC clarified this by citing their inclination towards BJP. However, BJP is neither accepting nor denying the new joiners.

It was the second wave of defections in the party after Suvendhu Adhikari with other MLAs switched to BJP and now the third wave is expected to be in the third week of February which is after the announcement of election dates.

TMC is well aware of saffron party’s agenda of encouraging defections in Trinamool but Mamata has planned strategies to overcome these jolts.

With so many entries the BJP is also confused to whom to give tickets as many of them have faced anti-incumbency in their constituencies but saffron party advices that in case if the leaders do not get ticket then they can go with Suvendhu Adhikar school of thought of contesting as independent to cut off the TMC votes.

The rising number of dissidents in TMC and their entries in BJP has given a hope of BJP to come in power but TMC Supremo says people vote for the main leader not the local members.