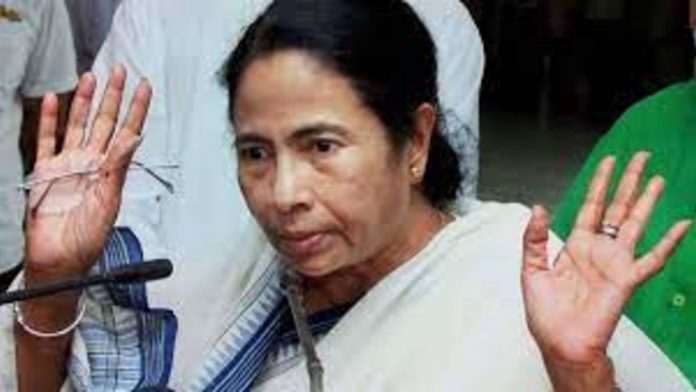 West Bengal Chief Minister Mamata Banerjee, who had been camping at the CBI office of Kolkata after the arrest of four TMC leaders in connection with the Narada bribery case finally left the place saying “Court will give the decision,” pointing towards that the implications of the arrests.

She had been camping since Monday morning till evening forcing the investigation agency to arrest her as well.

As per the reports the CM had been saying the CBI officers that “they have to arrest her if they want her to leave their office”. Sources from the agency said that Ms Banerjee’s action were not less than any interference in the investigation handed over to them by the Calcutta High Court.

The Narada bribery case was a sting operation conducted to catch ministers taking bribe on camera.

These four TMC leaders who were arrested were recorded in the camera taking money as a bribe.

Speaking over the arrests of the four leaders the TMC spokesperson Kunal Ghosh said the act by the CBI seems to be revengeful after the BJP’s defeat in the state. “The BJP is still not able to accept defeat in the polls after having made an all-out attempt to win… This is a reprehensible act.

“When the state is fighting the Covid situation, they are trying to create disturbances in such a manner,” he said.

TMC MP Sougata Roy called the CBI act as a “vengeful and vindictive” decision by the central government. “The CBI action is politically motivated,” said another TMC MLA Tapas Roy.

Calling the act illegal West Bengal Assembly Speaker Biman Banerjee contended the CBI move on Governor’s permission was illegal. “I have not received any letter from the CBI nor has anybody sought any permission from me as per the protocol,” he said.

Governor Jagdeep Dhankhar gave permission to the CBI to prosecute the leaders involved in the case.

“I do not know for what unknown reason they went to the governor and sought his sanction. The chair of the speaker was not vacant at that time, I was very much in office. “This sanction is absolutely illegal and arresting anyone on the basis of this sanction is also illegal,” said Biman Banerjee.

The CBI in its statement has also claimed that the agency has arrested the four leaders with an approval from the competent authority.

The CBI also said that it had submitted its investigation report on the matter to get permission from the authority to prosecute the leaders. “The sanction was received from the competent authority on May 7, 2021, in respect of the said accused,” said the CBI pointing out the permission it received by the Governor.

“Main allegation in the case was that the said accused as public servants demanded and accepted illegal gratification to show favour to a private person who was posing as a representative of a fictitious company at the time of transaction and discreetly recording the same,” said the investigation agency.