Mamata Banerjee Won’t Be Able To Stop The Implementation Of CAA, Says Shah

CAA implementation will benefit the people of Matua who are majorly Hindus living since the partition and those who have migrated to India from Afghanistan, Pakistan and Bangladesh, said Shah. 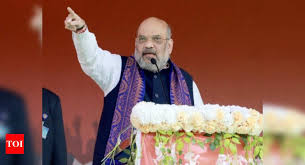 Union Home Minister Amit Shah while addressing a rally on Thursday in Matua town Thakurnagar announced that the process of granting citizenship under the Citizenship Amendment Act 2019 will begin soon after the Covid-19 vaccination.
On being the CAA a contentious act he said, “As soon as the vaccination drive will conclude and we become corona-free, the work of providing citizenship will be undertaken. CAA is Parliament’s law, how can you stop it? Also, you will not be in a position to stop it”.
Addressing a rally in Matua he also said that the CAA implementation will benefit the people of Matua who are majorly Hindus living since the partition and those who have migrated to India from Afghanistan, Pakistan and Bangladesh.
He again clarified that the new citizenship law will not impact the citizenship status of Indian minorities and also alleged the Opposition for misleading the minorities.
“Mamata didi said we made a false promise. She started opposing the CAA and saying she will never allow it. The BJP always fulfils the promises it makes. We have brought this law and refugees will get citizenship,” said Shah.
The Union Minister also said that Mamata Banerjee will not be able to stop the implementation of CAA as she will not be the Chief Minister anymore after the West Bengal elections. The state is going to have its assembly elections in the months of April-May.
The CAA implementation would have started but due to the sudden emergence of the Pandemic led to its suspension but now it will start getting implemented soon after the completion of vaccination.
There were widespread protests in 2019 against this contentious Citizenship Amendment Act 2019 as people feared that once National Register of Citizens (NRC) comes into then the CAA will snatch the citizenship of lakhs of minorities.