West Bengal Chief Minister Mamata Banerjee slammed the Union Budget 2021, calling it anti-farmer and anti-people. BJP, on the other hand, believes that the Budget addresses each and every section of society. 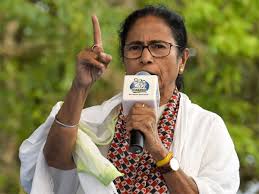 In the first paperless Union Budget presented on February 1, finance minister Nirmala Sitharaman allocated Rs 25,000 crore for highway projects in West Bengal. The money will be spent on upgradation of the road network between Kolkata in South Bengal and Siliguri in North Bengal. That this stretch passes through constituencies with high political stakes for both Trinamool Congress and BJP has Mamata Banerjee seeing red.

Soon after Sitharaman’s presentation, Mamata lashed out at the Budget, calling it anti-farmer and anti-people. “In this Budget, there is a lot of cess and people of Bengal will be ‘shesh’ (finished). The government is selling away everything. They’re selling off railways, ports, roads; they’re selling off you and us,” she said.

One of Mamata’s strategies is to cash in on the insecurity among people regarding economic growth and jobs. She will campaign that the Budget does not address the core issues of development. In this, she’ll be aided by her finance minister Amit Mitra, who is of the opinion that the Budget is not generating any actual revenue, thus making it harder to overcome the deficit.

BJP, on the other hand, believes that the Budget addresses each and every section of society. Dismissing the Trinamool’s allegations, BJP national general secretary Kailash Vijayvargiya said, “I thank the Prime Minister for the development packages. He has paved the path for building Sonar Bangla (Golden Bengal).”

The BJP’s development campaign will be further bolstered by Prime Minister Narendra Modi, who will be visiting Trinamool turncoat Suvendu Adhikari’s turf Haldia on February 7. If sources are to be believed, Modi will announce several infra projects worth Rs 4,500 crore in the oil and gas sector.

Why industrialisation is the catchword

Once the capital of British India, Kolkata used to be the hub of trade and commerce in the entire South Asia, and aided by various social reform movements, attracted industries and businesses from across the globe.

In 1911, the British shifted the capital to Delhi; and Mumbai became the financial capital. Since the 1960s, Bengal witnessed political and social turmoil in the form of Naxalite movement. Trade unionism blossomed under the Left regime, forcing industrialists to flee and set shop in cities such as Bengaluru and Hyderabad. What followed was the brain drain from Bengal.

Mamata, after coming to power, tried to curb the state’s bandh culture. But her role in the anti-land acquisition movements in Singur and Nandigram remain fresh in public memory. The movements catapulted her to power but further damaged the state’s prospects as a potential investment destination.

And now, BJP is pitching itself as the party that’ll return industry in Bengal. Sources say Union commerce and industries minister Piyush Goyal is coordinating with the business community to attract investments in the state in case of a BJP victory. Faced with a resurgent BJP, Mamata too is trying up her development game. Sources say she is in touch with the Tata Group, which once had to face a humiliating exit from Singur.

A taste of tea garden politics

On February 1, Sitharaman had also announced an Rs1,000-crore package for tea gardens a step likely to benefit North Bengal where the BJP is strong. The lamentable condition of tea garden workers, who form a significant population in many constituencies, is a major poll issue. The BJP will try to reach out to this segment riding on the Budget announcement.

A few days back, Mamata had announced an increment in minimum wages for tea garden workers. At present, she is on a two-day visit in North Bengal’s Alipurduar district. On February 2, she participated in a mass wedding ceremony and shook a leg with tribal dancers. Apart from political meetings, the Trinamool is also focusing on social outreach in a region where the BJP had won seven out of eight Lok Sabha seats in 2019.