The Chief Minister has also inaugurated a guest house with the new heliport in the state. 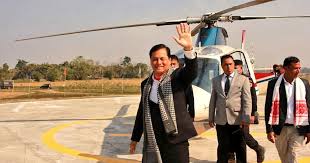 Chief Minister of Assam Sarbananda Sonowal inaugurated a heliport at Kerelagaon in Majuli district of Assam. It is the first heliport in Assam.

The heliport has the facility of landing three helicopters together and approx 50 lakh were spent from state government united fund for its construction. A guest house was also inaugurated with the new heliport by the Chief Minister.

The heliport is built in Majuli to boost tourism in the district as Majuli is the world’s largest river island, said the Chief Minister Sonowal and building Majuli one of the best tourist places of the world is one of the aims of Assam government and this heliport will help in bringing tourists to Majuli, added Sonowal.

Apart from this the Assam government has also initiated several steps to develop and strengthen the road infrastructure and boosting tourism in Majuli, said the Chief Minister.

He told that the state government has also initiated projects of constructing bridges connecting Majuli with Jorhat. For this the technical bid has opened and the financial bid will open within the next two days and then the construction will be started.

Many projects for transpiration of river in Majuli will also kick start soon in this month.