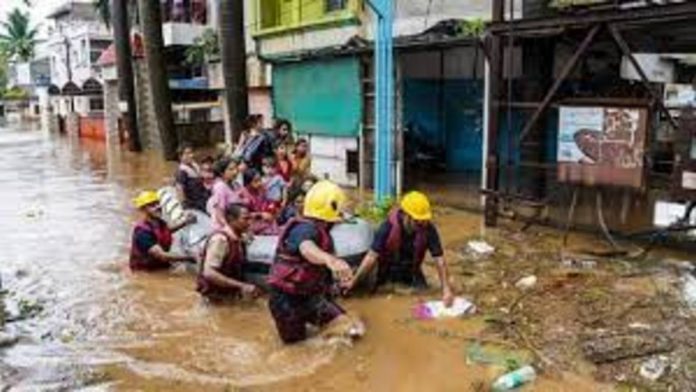 Heavy rain is continued to wreck havoc Maharashtra from past few days. The calamity has caused 129 deaths with many reports of landslides from many parts of the state in last two days. Amid which, 84,452 people in Pune were shifted to safer places on Friday, said officials.

“The death toll in Maharashtra in the last 48 hours has reached 129. Most of the deaths are from Raigad and Satara districts,” the officials said. The areas where there is a flood like situation has persistent are Raigad, Palghar, Kolhapur, Thane, Nagpur and Ratnagiri.

With landslides, several people have been shattered in the floodwaters. Death toll in Satara district of Maharshtra has gonen up to 27 now, officials said.

in addition, 38 people have lost their lives in a landslide in coastal Raigad district’s Mahad Tehsil on Thursday.

More than eleven individuals, including eight Nepalese workers, were safeguarded at the last possible second before the bus wherein they were travelling was cleared away in an overflowed stream in Western Maharashtra’s Kolhapur locale on early Friday morning, police said.

As per a defence release, an aggregate of 15 relief and rescue groups containing troops from the Aundh Military Station and Bombay Engineer Group based at Pune have been deployed in vulnerable regions. The Indian Army has dispatched ‘Operation Varsha 21’ for flood relief and rescue work in the state, it said. .

“With the unprecedented rains and resultant heavy flow of water in various rivers, a number of areas in many states are likely to be impacted by floods. Presently the districts of Ratnagiri, Raigad, Pune, Satara, Kolhapur and Sangli in Maharashtra have been affected,” it further said.

“These columns will be assisting the civil administration in the rescue of local population stranded in submerged areas till normalcy is restored,” it said.

In a statement Lt Gen J S Nain, GOC-In-C Southern Command said that the “Indian Army stands with people in these testing times and all assistance will be provided by the Army in the affected areas”.

The India Meteorological Department (IMD) has also issued a red alert and directed for preventive measures on Friday to six districts with a forecast of “extremely heavy” rainfall.

“The alert was issued for the next 24 hours for the districts of Raigad, Ratnagiri, and Sindhudurg in coastal Konkan and also for Pune, Satara, and Kolhapur in Western Maharashtra. Extremely heavy rainfall is “very likely” at isolated places in ghat (hilly/upland) areas,” said an IMD official.