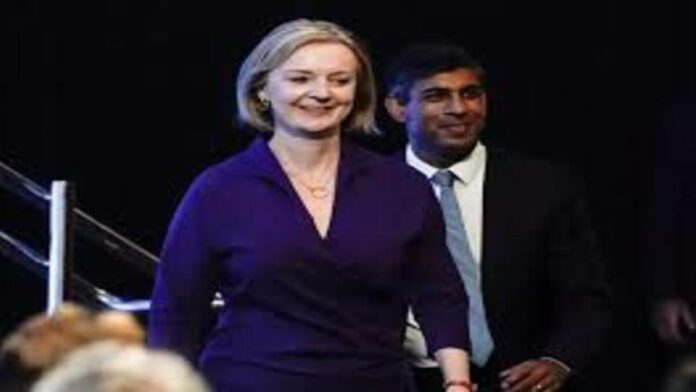 The country is currently experiencing a crisis in the cost of living, industrial unrest, and a recession. On Monday, Liz Truss was elected as the leader of the ruling Conservative Party and the country’s next prime minister.

The statement on Monday marked the start of Boris Johnson’s leadership transition after weeks of a contentious and frequently tense party leadership election that pitted Truss against former finance minister and person of Indian descent Rishi Sunak.

Truss won 81,326 votes, beating Rishi Sunak, who received 60,399 votes, to be crowned the new leader of the Conservative Party.

“Over the next two years, we must demonstrate our ability to deliver. I’ll present a daring strategy to reduce taxes and expand our economy “Truss remarked following the declaration of the outcome.

“I will address the energy crisis, taking care of people’s energy bills while also addressing the long-term problems we have with energy supply,” the speaker declared.

Early in August, Tory members began voting for their preferred candidate between Sunak and Truss. Voting ended on Friday night.

Nearly 52% of respondents stated that Truss would make a “poor” or “awful” prime minister, and 43% said they had “no faith” in her to handle the problems caused by the high cost of living. Another 37% of Britons think she will largely be like her predecessor.

The two candidates faced off in a postal vote among the approximately 160,000 Conservative electors to succeed outgoing British Prime Minister Boris Johnson.

After being embroiled in a scandal for several months, Johnson was compelled to announce his resignation in July. On Tuesday, Johnson will travel to Scotland to present his resignation to Queen Elizabeth. He will be succeeded by someone who will be tasked with forming a government.

Truss, who had been the front-runner in the contest to succeed Johnson, was elected as the fourth prime minister for the Conservatives since the 2015 election. Over that time, the nation has been tossed from crisis to crisis, and now faces what is expected to be a protracted recession brought on by skyrocketing inflation that peaked in July at 10.1%.

Truss, who served as Johnson’s foreign minister, has pledged to move swiftly to address Britain’s rising cost of living crisis, claiming that within a week she will develop a strategy to address rising energy costs and guarantee future fuel supply.