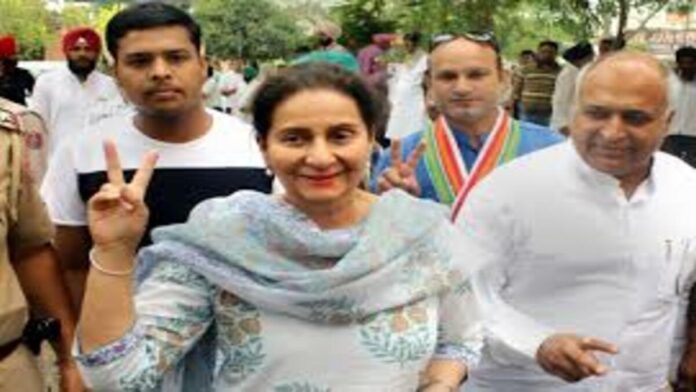 The leaders of the Punjab Congress unanimously adopted a resolution today requesting that Preneet Kaur, an MP and the wife of Capt. Amarinder Singh, be expelled from the party for suspected anti-party activities.

The conference was designed to mobilise party cadres for the September 4 demonstration in Delhi against rising inflation and the upcoming “Bharat Jodo Yatra,” which was presided over by party in-charge for Punjab affairs Harish Chaudhary. Partap Singh Bajwa, the leader of the Congress Legislative Party, as well as current and former lawmakers and MPs, attended the conference.

Insubordination would not be accepted at any cost, Chaudhary stated without mentioning anyone specifically, including Sukhpal Khaira. He said that party meetings would be a better venue for guidance than social media. Khaira wasn’t there when the meeting started.

The Patiala MP had allegedly received a show-cause notice for her anti-party activities, but no further action was taken, it was noted. The party high command, according to Chaudhary, was keenly observing all of these politicians’ activities. According to MP Preneet Kaur, the PCC chief lacked the power to determine her fate. “I am carrying out my duties until I am a member of parliament. The decision on the matter rests with the party high command, she stated.

Discussions about discipline also included Sandeep Jakhar, an Abohar MLA, who had previously called the PCC chairman “arrogant” in his remarks.

Raja Warring, the head of the PCC, stated that party leaders believed that all such leaders, including the MP, should face heavy punishment for engaging in “anti-party activities.” Sandeep Jakhar’s affiliation with the BJP is openly acknowledged, according to Warring.

Sandeep Jakhar, a lawmaker, stated, “Let the party give me notice if there is something against me. I’ll respond.

At least 10,000 Congress workers from Punjab, according to the PCC chief, would take part in the protest against inflation on September 4 in Delhi.