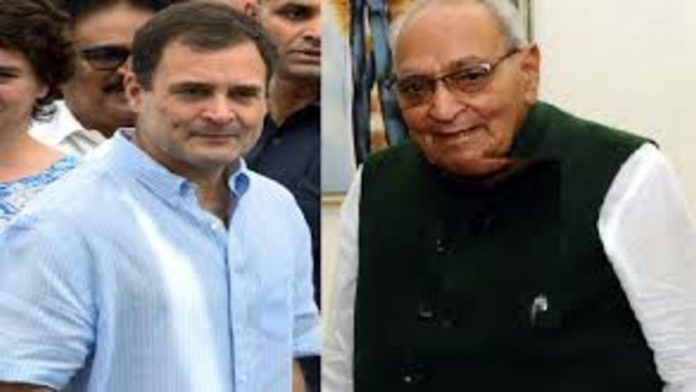 Congress MLA Arun Vora, has reacted to claims that his father, late Congress politician Motilal Vora, is to blame for the Young Indian-AJL transaction. According to Arun Vora, the allegations are unfounded, and he believes Rahul Gandhi cannot make such accusations against his father.

The Enforcement Directorate (ED) is questioning Rahul Gandhi in connection with a money-laundering investigation involving the National Herald-Associated Journals Ltd agreement. According to reports, Rahul Gandhi told the ED on Wednesday that Motilal Vora was the authorized signatory for all financial transactions between the AJL and Young Indian Private Ltd, which owns National Herald and is supported by the Congress.

In response, Arun Vora stated, “These are unsubstantiated claims. Voraji, like the Congress leadership, cannot be incorrect.”

In their testimony to the ED, Congressmen Pawan Bansal and Nitin Gadkari indicated that the arrangement was not made by a single person and that Vora was fundamentally responsible for all financial transactions, according to sources.

According to Arun Vora, “I’m not sure about Pawan Bansal’s and Kharge’s accounts, but the truth always wins. The winners will be Sonia ji, Rahul ji, and Vora ji.”

What is the Deal Between Young Indian and AJL?
In 2012, BJP leader and advocate Subramanian Swamy filed a complaint in a trial court saying that some Congress leaders were involved in deception and violation of trust in the Young Indian Ltd’s acquisition of Associated Journals Ltd. (YIL). He said that YIL had’maliciously’ ‘taken over’ the National Herald’s assets.

YIL “took over” the assets of the defunct print media business in a “malicious” manner, according to Subramanian Swamy, in order to profit and grab assets worth over Rs 2,000 crore.

Motilal Vora was the treasurer of the AICC at the time, and he was very involved in AJL matters. In January 2008, he also co-signed an agreement declaring the closure of the AJL group’s National Herald publication.