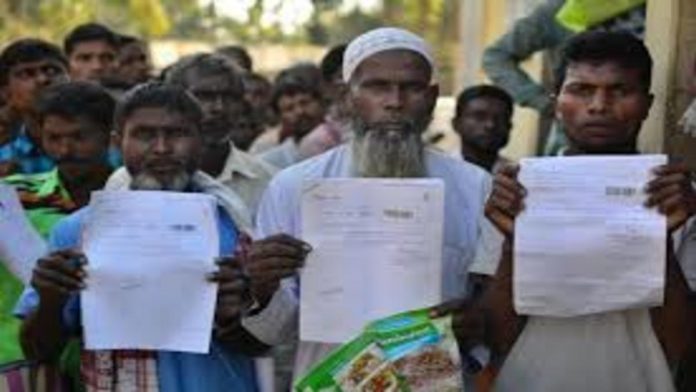 Bhanu Upadhyay, a postdoctoral fellow at IIT Bombay, has been looking for an Aadhaar card for the past 18 months. The 33-year-old Nepali-origin resident of Assam’s Aadhaar application is “still under process” after numerous calls to toll-free numbers, e-mails, and visits to application centres.

Upadhyay, a native of Abhongpathar, a remote village in Golaghat district, was able to circumvent the requirement for a unique identifying number. “But it’s giving me sleepless nights now since I will be applying for jobs at central institutions which won’t accept my application without Aadhaar,” he says.

Upadhyay isn’t the only one who thinks this way. Around eight lakh persons who gave biometric information and were included in the National Register of Citizens (NRC) published on August 31, 2019, are unable to obtain Aadhaar and are concerned about the benefits that come with it. Although 27 lakh persons submitted their biometrics, 19 lakh of them were unable to locate their identities in the NRC.

Officials from the state administration believe it is a “unique problem,” blaming it on red tape and a lack of understanding about the NRC process itself. The state raised the problem in a letter to India’s Registrar General, but no action has been taken as of now.

A Supreme Court-approved Standard Operating Procedure (SOP) from November 2018 is at the root of the issue. Those who were not included in the draft NRC list published on July 31, 2018, were required to provide their biometrics during the ‘claims’ (to include themselves in the NRC) and ‘objections’ (to object to someone else’s inclusion) hearings, according to the SOP. These hearings took place in the weeks leading up to the release of the entire list on August 31, 2019.

“Once the final NRC has been published, such persons who are included in the NRC, will be given the usual Aadhaar number as applicable to legal residents in the country,” Clause 9 of the SOP stated. According to officials engaged in the SOP’s formulation, the clause was introduced as a security measure to maintain track of the digital entities of persons who may be removed from the list.

The state’s Home and Political Department was appointed as the exercise’s registrar, with the UIDAI providing technical assistance. During the procedure, the UIDAI obtained the biometric information of 27, 43,396 people.

Upadhyay recalls going to Guwahati and driving to Sarupathar in Golaghat for the hearing in March 2019. His mother had arrived at the NRC, but his father, sister, and he had not. “Once the list comes out, the officials informed us we’d get our Aadhaar cards,” he says. All three arrived at the NRC on August 31. He replied, “I’m relieved the experience was ended,” but the Aadhaar ordeal had just begun.

The biometrics freeze is linked to the fate of the NRC, which is still in limbo two years after it was published: the Registrar General of India has not notified it, and the Supreme Court, which monitored the process from 2013, has not heard the case since January 6, 2020. Both the BJP administration and the NRC state coordinator have refused to recognise it, and are now pushing for a “corrected” NRC.

“Right now, nothing is happening,” said an NRC officer who asked to remain anonymous. H D Sarma, the NRC state coordinator, filed an affidavit with the Gauhati High Court last year, describing the August 31 list as a “supplementary” list and requesting re-verification.

The Supreme Court SOP clearly said that Aadhaar will be issued to people who are part of the “final NRC,” according to sources in the NRC state coordinator’s office. “However, the NRC we now have is not final… So, even if it’s for an Aadhaar card, how can we exchange information on the applicant’s data? That would be a violation of the Supreme Court’s decision,” according to the official.

Officials at the UIDAI Regional Office in Guwahati said that they are unable to provide Aadhaar numbers “till a clarification is received from RGI and the matter is communicated to UIDAI by Home and Political Department, Government of Assam.”

In a mail, Kuldeep Pegu, Deputy Director, UIDAI, Guwahati Regional Office, said the NRC biometric enrolment has been placed on hold in accordance with SOP rules. “Till a clarification is received from RGI and the matter is communicated to the UIDAI by Home and Political Department, Government of Assam, the Aadhaar number cannot be issued,” he said.

Bikash Singh, a 22-year-old Computer Applications graduate from Duliajan in Upper Assam, is one of them. He has written to the Prime Minister’s Office, the RGI, the Chief Minister’s Office, and the UIDAI, Guwahati, unable to apply for jobs due to a lack of an Aadhaar card, but to no avail.

“My brother, who is in the first year of college, has not been able to apply for scholarships. It is mental torture,” said Singh.

Mamtaz Begum, a housewife from Baksa district in Assam, has applied for Aadhaar seven times. Roshni Singh, a newly married Assamese Bihari living in Mumbai, said she has been unable to open a bank account or obtain a ration card.

The state government, for its part, has communicated with the central government about the matter. In July, Assam Chief Minister Himanta Biswa Sarma responded to a query in the Assembly by saying that the state had raised the issue with the RGI and the Union Home Secretary.

Since March 2020, the NRC office in Guwahati has written three times to the state’s Home and Political department, emphasising the “deprivations of the public.” In the latest letter, H D Sarma, the NRC coordinator, said: “…around 26 lakh applicants whose biometrics were captured during claims and objections phase are not able to obtain the Aadhaar card as the enrolment numbers have been blocked by the UIDAI as per para 9 of the SOP… government may like to file an affidavit in the Supreme Court seeking relaxation of para nine of the SOP so that applicants are able to avail the benefit of Aadhar card.”

Officials from the Department of Home and Political Affairs stated they wrote to the Union Home Secretary and RGI twice, in November 2020 and June 2021.

“RGI has not made their stand on the NRC clear yet… till they declare it as the final NRC, our hands are tied,” a Home and Political Department official stated.

People like Upadhyay, Begum, and Bikash Singh are caught in the midst. Bikash Singh has started the ‘We Want Aadhaar’ WhatsApp group. “There are around 35 people on it, and everyone is dealing with something… Someone’s PF has ceased, while another is unable to obtain a ration card. I’m not sure how much it’ll help, but at least we’ll be able to vent,” he remarked.