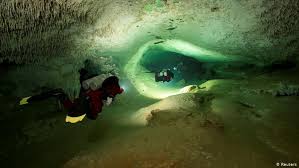 Mexican scientists discovered the world’s largest flooded cave system that extends an amazing 216 miles (347 km) and is filled with artifacts. The maze of caves is a major archaeological find that promises to shed light on the mysteries of the Mayan civilization.

Underwater archaeologist Guillermo de Anda of Mexico’s National Institute of Anthropology and History led the Great Maya Aquifer Project (GAM), which has been exploring underwater caves on the Caribbean coastline of the Yucatán Peninsula in Mexico for decades. The region has 358 freshwater flooded cave systems that stretch for over 870 miles (1,400km).

De Anda explained that their accomplishment has wide-ranging significance:

“This immense cave represents the most important submerged archaeological site in the world,” said de Anda. “It has more than a hundred archaeological contexts, among which are evidence of the first settlers of America, as well as extinct fauna and, of course, the Maya culture.”

The current research effort took 10 months and proved that two caves systems – the Sac Actun System and the Dos Ojos caves are actually part of one continuous and, certainly gigantic, cavity in the Earth.

“It was like trying to follow the veins within a body,” said Schmittner. “It was a labyrinth of paths that sometimes came together and sometimes separated. We had to be very careful.”

Now that the researchers showed that the two cave mazes are linked, they think another three underwater cave systems can be added to what is already the longest cave labyrinth in the world.

The impressive caves present an invaluable scientific loot, with divers finding a large amount of Mayan artifacts like ceramics, remains (including those of early humans, giant sloths and tigers) and extinct fauna.