Kartik Aryan First To Own McLaren In India, Gifted By Bhushan Kumar 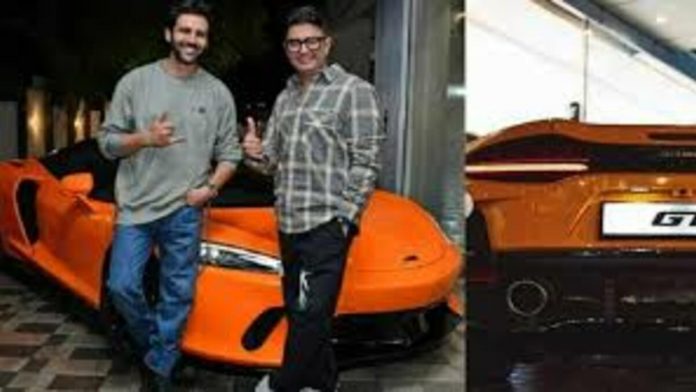 The bond between Bhushan Kumar and Kartik Aaryan has advanced significantly. Whether it was their debut collaboration on Sonu Ke Titu Ki Sweety in 2018 or the current song Bhool Bhulaiyaa 2, they have worked together to produce big achievements that have cemented their friendship. Bhushan has since given the first McLaren GT to an Indian actor.

Azores Calipers and the recognisable McLaren Orange are features of Kartik Aaryan’s McLaren GT. Gloss Black is used for the wheels.

Farah Khan was one of several who commented on Kartik’s tweet and remarked, “Mubarak ho…” Aashish Chanchlani, a social media personality and comedian, contrasted the statement with “Ye leke abhi ulhasnagar aao, sandwich khaate.” Fans flooded Kartik’s post with congratulations as they shared the same excitement for him.
Kartik is currently savouring Bhool Bhulaiyaa 2’s success. Anees Bazmee is the director of the film, which also features Kiara Advani and Tabu in significant roles. One of the few movies that surpass Rs 170 crore during the COVID-19 pandemic, the movie has been making money registers ring at theatres.

With subsequent films like Shehzada, Captain India, Freddy, and Sajid Nadiadwala’s untitled next, Kartik Aaryan is prepared to enthral fans.