Kamal Haasan encouraged the Tamils to vote for MNM for getting a corruption-free rule. 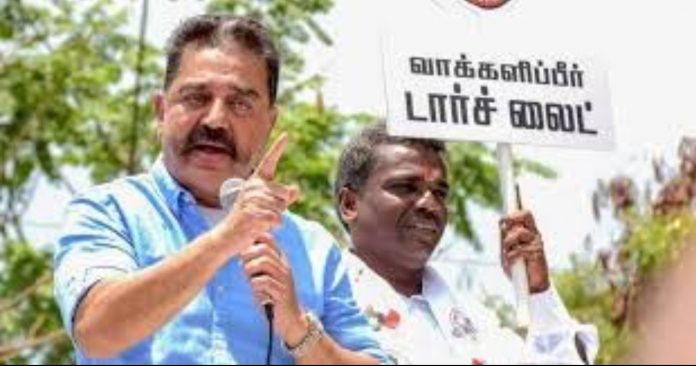 Kamal Haasan’s Makkal Needhi Maiam (MNM) announced its seat sharing formula on Monday for the upcoming polls in Tamil Nadu. The founder Kamal Haasan said the party will fight on 154 seats out of 234 total assembly seats.

The party has alloted 40 seats each for both of its alliances, the Indhiya Jananayaka Katchi and All India Samathuva Makkal Katchi (AISMK).

While forming its alliance with MNM, the AISMK founder Sarath Kumar had said that Kamal Haasan will be the Chief Ministerial candidate of the alliance.

“In principle, we have decided to journey together. Kamal Haasan will be the chief minister candidate for the emerging alliance,” Sarath Kumar had said.

The state is going under polling on April 6.

Last week taking a jab on both BJP and AIADMK Haasan had said that the BJP thinks it can get votes easily from Tamils by “tweaking” Tamil pride whereas, the manifestations made by AIADMK government for providing jobs to the youth seems too far from reality.

Saying, “Tamils are not for sale, their votes are also not for sale,” Haasan encouraged the Tamils to vote for MNM for getting a corruption-free rule.

Manifesting about Women empowerment he said that his party will be devoted to the development of women by providing 50% reservation in uniform sector for women with establishing banks for women that will also be run by women.

Hostels will be made free for staying overnight for any women in distress, he added.