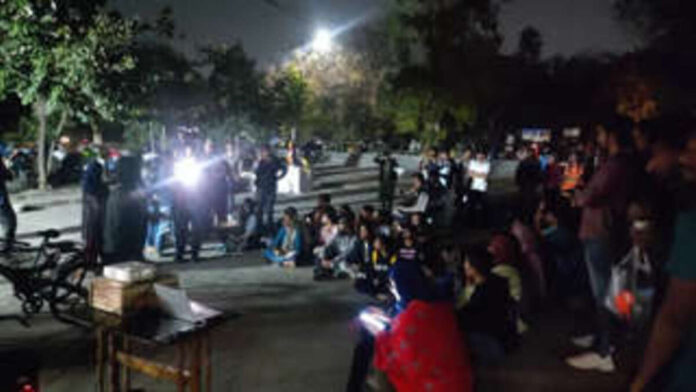 The broadcast of a BBC documentary that criticises Prime Minister Narendra Modi has been cancelled, according to the Jawaharlal Nehru University (JNU) and its students’ union. Following the distribution of a poster by the university’s students’ union promoting the polarising documentary screening at its office on Tuesday, the administration made its choice. On the other hand, a student organisation from Hyderabad Central University planned the BBC documentary’s January 21 screening inside the campus.

In addition, the JNU administration threatened “severe disciplinary punishment” if the event was not postponed.

However, sources within the Jawaharlal Nehru Students Union (JNUSU) stated that because the documentary has not been legally outlawed, the showing will still take place.

The Student Islamic Organization (SIO) and Muslim Student Federation, also known as the fraternity group, organised the screening in Hyderabad. The group’s attendance during the film totaled more than 50 students.

The contentious BBC documentary “India: The Modi Question” will be screened in Kerala, according to a Tuesday announcement by the Democratic Youth Federation of India (DYFI), the party’s youth arm. The news was published by DYFI on its Facebook page.

The connections to the documentary “India: The Modi Question” had been ordered by the government to be blocked on Twitter and YouTube on Friday. The documentary has been derided by the Ministry of External Affairs as a “propaganda effort” that lacks objectivity and exhibits a colonial mentality.

The government’s decision to restrict access to the documentary has been criticised by opposition parties.

In a statement released on Monday, the Jawaharlal Nehru University (JNU) administration stated that the union had not requested permission for the event and that it should be cancelled because it might “disturb peace and harmony.”

The university stated in its advisory that “the administration has been made aware that a group of students have produced a leaflet for the screening of a documentary or movie (named) “India: The Modi Question” slated for January 24, 2023, at 9:00 pm in Teflas.” The JNU administration had not given its prior approval for this event, it claimed.

The purpose of this is to emphasise how such an unauthorised activity could impede on the tranquilly and harmony of the university campus. The affected students or individuals are strongly encouraged to cancel the proposed programme right away; else, strict disciplinary action may be taken in accordance with university policies.

The national administration, meanwhile, has responded angrily to the BBC documentary that questioned PM Modi’s direction during the violence in Gujarat in 2002.

The central government has cracked down on YouTube videos and Twitter messages that contain links to the programme after criticising the UK broadcaster for presenting “falsehoods” in a “propaganda piece.”

On Tuesday, Kiren Rijiju, the union law minister, criticised individuals who were in favour of the film, claiming that for some, “the white rulers are still the masters whose decision on India is final and not the decision of the Supreme Court of India or the will of the people” of the nation.

On Sunday, the Union minister also criticised Indians who “still haven’t recovered from the intoxication of colonialism.”

Rijiju had claimed in a tweet that “they consider BBC above the Supreme Court of India and lower the country’s dignity and image to any extent to appease their moral masters.”

The two-part BBC documentary “India: The Modi Question” claims to have looked at the details of the riots that occurred in Gujarat in 2002 while Modi was the state’s chief minister. India has not seen a screening of the documentary.