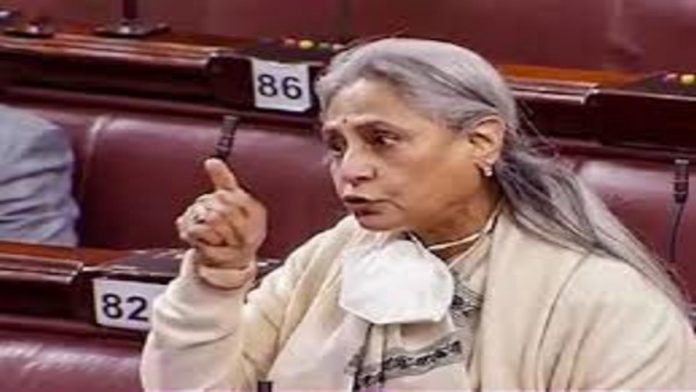 Jaya Bachchan, a member of the Samajwadi Party, lost her cool in the Rajya Sabha on Monday after a personal remark made by a member during a debate on a narcotics bill. She made no holds barred in her criticisms, the most of which were directed at the Treasury benches, and she even accused the chair of not listening to the opposition or “protecting” opposition members.

“We’re looking for justice.” We don’t expect justice from there (the Treasury benches), but do you think you can deliver it? How are you going to defend the residents of this house, as well as the 12 people that are sitting outside? “How are you safeguarding them?” Ms Bachchan mentioned this while speaking to Bhuwaneswar Kalitha, the Chairperson.

“It is my chance to talk,” Ms Bachchan answered when the chairman pointed out that she was not commenting on the narcotics bill and it appeared that “you are not interested in the subject.” We have given three to four hours to discuss a clerical error”.

As members from around loudly protested, then actor-turned politician exploded, targeting the treasury benches. “What is going on? This is terrible… Aap logon ke bure din aayenge, (Your bad days will come)”.

A heated confrontation erupted when BJP MP Rakesh Sinha raised a point of order accusing her of targeting the Chair. Ms Bachchan urged that the Chair take action against the member, claiming that they had made “personal statements” about her.

The Chair, on the other hand, announced that any remarks that were not appropriate will be removed from the record.

“This is not the place for you if you want to fight. Please accept my sincere apologies. I’m going to introduce the next speaker “Mr. Kalitha expressed his thoughts.

“What right do they have to make personal remarks in the house? Isn’t it sad that you don’t have enough decency or respect for your coworkers who are sitting outside?” I curse you, aap logon ke bure din bohot jald aayenge.

Mr Kalitha adjourned the House until 5 p.m. as the situation threatened to spiral out of control.

Ms Bachchan later said, “I don’t want to make any personal comment on anyone. What happened was very unfortunate and they should not have spoken the way they did”.

Jugal Lokhandwala, one of the treasury bench MPs who allegedly made the “personal remark” that enraged Ms Bachchan, told NDTV that when he said “you would not do theatre,” he was referring to the entire opposition.

“I later learned that Jaya Bachchan is furious in the House. I didn’t make any disparaging remarks about anyone… I said this while looking at the opposition as a whole… the opposition is enraged “Added he.

The Enforcement Directorate questioned Ms Bachchan’s daughter-in-law, star Aishwarya Rai Bachchan, for five hours today in connection with alleged FX crimes relating to the ‘Panama Papers.’ According to sources, she allegedly concealed her money in a firm situated in the British Virgin Islands.