Is Uma Bharti thinking of returning to her state politics ?

The former Union minister’s self-imposed exile ends in 2022, just in time to start preparing for the 2023 state assembly election. 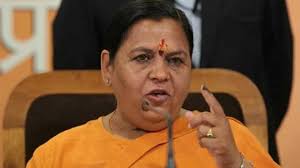 Former Union minister and Madhya Pradesh chief minister Uma Bharti, who has been on a self-imposed three-year break from electoral politics since the 2019 Lok Sabha election, is in the news again. The sanyasin, in Bhopal for a few days, has been holding forth on various subjects, speaking her mind to the media. Political watchers feel Bharti is preparing for her political comeback and it is going to be in her own state and not in Uttar Pradesh, where she was ‘banished’ to after she fell out with the BJP leadership in Madhya Pradesh.

The issue Bharti has chosen to raise right now is that of prohibition. The timing was impeccable. There have been two hooch tragedies in Madhya Pradesh—one in Ujjain in October and the other in Morena last week. Almost 40 people have died in these tragedies despite chief minister Shivraj Singh Chouhan’s claims of tackling the liquor mafia. Bharti asked the BJP national president J.P. Nadda to ask all BJP-ruled states to go dry, which immediately got a lot of traction on social media.

It would be pertinent at this point to dwell on Uma Bharti’s career over the past two decades. She had led the BJP to a landslide victory in 2003, ousting the Congress from power after 10 years. She took over as CM in December 2003 but resigned after eight months when a warrant was issued in her name in August by a court in Hubli. She tried to return as CM, but the BJP leadership wasn’t keen to have her back and appointed Chouhan to the post instead in November 2005, enraging Bharti who resigned from the party, did a padyatra and formed her own party, the Bhartiya Janshakti, ahead of the 2008 election. But Chouhan had brought in some much-needed stability in the working of the government and Bharti lost. Her party later merged with the BJP and she returned to her parent party.

Bharti then contested the Vidhan Sabha election from Uttar Pradesh and was elected from Charkhari. Later she contested the 2014 Lok Sabha from Jhansi, won and was appointed a minister in the Modi government. Bharti remained relevant in politics by moving to another state—a feat not many in the present lot of political leaders have accomplished.

In February 2018 she announced her break from contesting elections for the next three years for health reasons. With her break ending in 2022, the question on everyone’s mind is whether her return to electoral politics be in UP or MP? It is unlikely to be UP where another saffron-clad leader—Yogi Adityanath—is firmly occupying the top spot. Her return via MP politics seems more probable. That Bharti and Chouhan do not see eye is an open secret. But the BJP’s political scene in MP has new players—with V.D. Sharma as state president and home minister Narottam Mishra’s stature growing in the party. While in Bhopal on Friday, she spoke of what she meant to do vis a vis prohibition during her time as CM. “Bharti would need an issue to raise for her political re-entry in MP and what better than prohibition—an issue that always gets the support of women voters?” says a top BJP leader.