Is Owaisi the biggest threat to Akhilesh Yadav’s SP 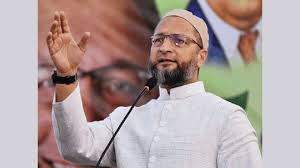 With a satisfactory performance in the 2020 Bihar assembly elections, All India Majlis-e-Ittehadul Muslimeen (AIMIM) chief Asaduddin Owaisi is now preparing on Uttar Pradesh (UP) that will on polls next year. In UP, Owaisi’s main target seems to be Akhilesh Yadav-led Samajwadi Party (SP).

Owaisi made it clear when he visited the state of Uttar Pradesh on 13 January confessing that Samajwadi Party is considered to be main rival party to AIMIM. Immediately after landing at Varanasi he told media persons that from 2012 to 2017 which was the regime of Akhilesh’s Samajwadi Party and he was denied from entering the state 12 times in this regime and did not even get the permission for arrival on 28 occasions.

Loksabha MP from Hyderabad, Owaisi, answered for being “vote katwa” party and “BJP agent” both, he replied for “vote katwa” party by saying “its opponents wanted that the people should keep voting them like slaves and other political parties should not contest elections. When AIMIM contests any election, their motive is to win it, and not to ensure victory or defeat of anyone else”. And for “BJP agent” he first asked his party leaders to not to care about such allegations and then he replied “In Bihar elections, AIMIM was in Secular Democratic Front and everybody knows who benefitted out of it. His obvious reference was to the five seats which AIMIM won in the Bihar assembly elections for the first time”.

Referring to Bihar elections he said the performance in Bihar elections has inspired me to contest in UP elections. Though AIMIM have contest on 38 seats in UP o which it did not win a single seat but it gathered 0.24 per cent of share in total votes.

As per his preparations he declared of contesting on 25 per cent of of total seats which will be around 100 in the total 403 seats of UP assembly.

For increasing the number of winning seats and voting share in the UP elections AIMIM is eyeing closely on Samajwadi Party as it is the party which gets maximum Muslim votes and Muslim population constitute to around 19.3 percent of the total population in the state.

Owaisi is thinking of applying the same strategy of Bihar in UP also. Ignoring being called AIMIm is in search of a constituency for itself. However, it has declared its first candidate for the polls. Abdul Mannan, who is an eye surgeon by profession will be standing in election from Utraula constituency from Balrampur district of Uttar Pradesh.

SP is likely to suffer from AIMIM’s entry and if AIMIM gains from the Bihar strategy then it will benefit BJP also as it did in Bihar, where BJP came out as the second largest party after RJD with only a difference of one seat.