At the Bhadbhada crematorium in Bhopal, people said they have not witnessed such scenes since the Bhopal Gas Disaster in 1984. 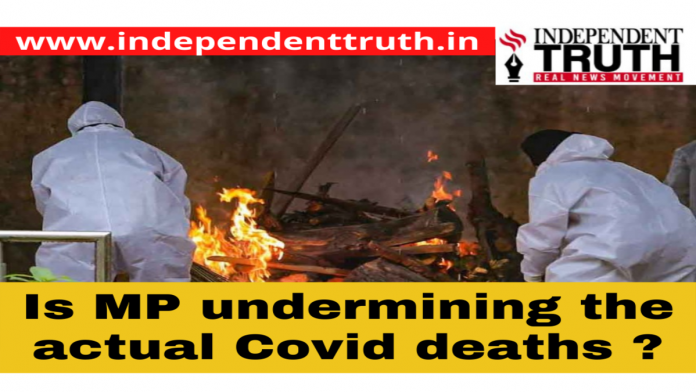 The cremation and burial grounds in Madhya Pradesh are full with dead bodies on a daily basis with the rise in Covid-19 cases and deaths in the state. But the official data of Covid fatalities is at a huge variance with that of bodies at these funeral grounds.

People near the Bhadbhada crematorium in Bhopal said that they had not seen such number of deaths since the Bhopal Gas Disaster in 1984.

“During the gas tragedy, when I was in Class 9, we witnessed such pictures. And today, in four hours, I have seen 30-40 dead bodies here,” said BN Pandey, 54 who was at the crematorium to do his brother’s funeral.

Queues of Ambulances with dead bodies can be seen near the crematoriums in Madhya Pradesh and people waiting for their turn to perform funerals.

Another witness at the spot, Santosh Raguvanshi, who had been waiting for 3-4 hours to cremate his brother-in-law said, “We can’t perform the last rites as there is no space.”

The mismatch shown between the official data and the actual deaths is so huge that that on Monday there were 37 bodies only at the Bhadbhada crematorium while the health bulletin of the state on that day reported 37 deaths in the entire state.

Although, the government has denied to admit that they are under-reporting the death toll of the state.

“The government has no intention of hiding the death count, we will not get any award by doing so,” said a Medical Education Minister Vishwas Sarang.

According to the official data, Madhya Pradesh on Tuesday reported its highest ever spike with 8,998 cases which took the state’s Covid tally to 3.53,632. 40 deaths were also reported for the day that took the death toll to 4,267.