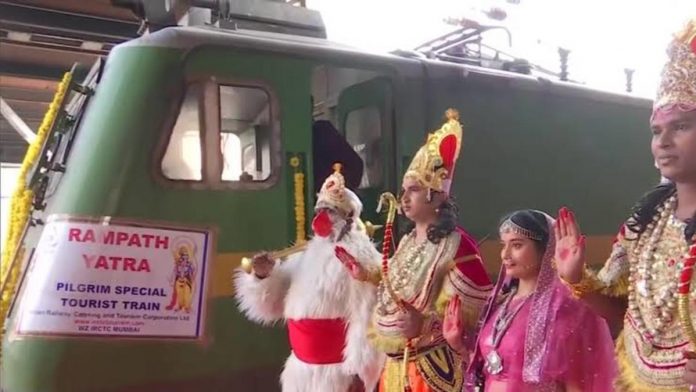 On Saturday, the IRCTC’s third Rampath Yatra Express train will begin service between Ahmedabad, Gujarat, and Ayodhya, Uttar Pradesh, through Madhya Pradesh. The journey will begin on Saturday at Ahmedabad’s Sabarmati Junction railway station and end on Sunday in Ayodhya, passing through Ratlam and Ujjain in the central state.

The train contains 640 seats, with 320 each in AC-3 tier and sleeper class coaches, according to Krishna Kumar, regional manager of the Indian Railway Catering and Tourism Corporation (IRCTC).

Kumar elaborated on the expedition, saying, “The total voyage will take seven nights and eight days.” IRCTC will handle all food and passenger accommodations, among other things. By booking online, you will be charged $12,600 for AC-3 tier coaches and $7560 for sleeper coaches. Devotees will be transported by road to Nandigram, Varanasi, Prayagraj, and Chitrakoot beginning December 27.”

The four locations, like Ayodhya, are associated with Lord Ram. These are also located in Uttar Pradesh.

Meanwhile, Singh clarified that both doses of the Covid-19 vaccination are not required for flight, but that all essential medical arrangements, including isolation wards, have been established on board.

In February of this year, the first Rampath Yatra Express set out from Indore, Madhya Pradesh. The second, from Pune, Maharashtra, was launched on November 27. Both trains ran between the two cities and Ayodhya.

Following the success of the Ramayana Express, the IRCTC launched the Rampath Yatra Express. The goal of the campaign is to increase pilgrimage tourism.