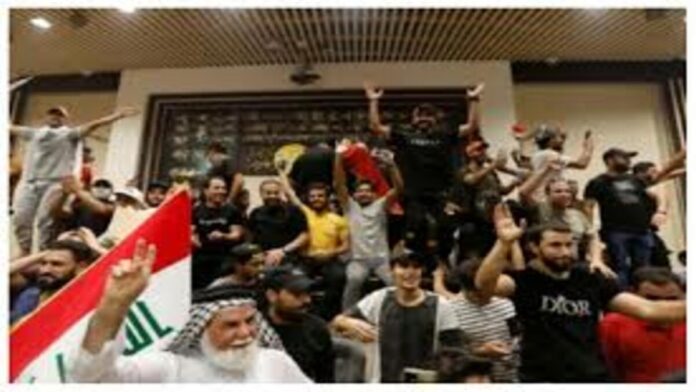 Baghdad saw violent protests when Iraqi Shi’ite leader Muqtada al-Sadr said on Monday that he was leaving politics. Protesters in Baghdad invaded the Green Zone and assaulted the Republican Palace, the seat of government, in what seemed to be a replay of the Sri Lanka crisis. Similar to the images that went viral from Colombo, Sri Lanka, when irate protesters occupied President Goatabaya Rajapaksa’s palace in agitation over political and economic turmoil, pictures and videos of demonstrators cooling off in the pool have been making the rounds online.

There have apparently been at least 15 demonstrators killed in Iraq thus far. As night struck and word of the Shia spiritual leader’s resignation spread, supporters of al-Sadr flocked to Baghdad’s streets. Al-militia, Sadr’s Saraya Salam, engaged in combat with the security force known as the Popular Mobilization Forces. As Muqtada al-supporters Sadr’s tore down cement barriers outside the government building and forcibly entered the palace, they took advantage of all the amenities offered, including the swimming pool, and more military forces were dispatched to the presidential palace.

The operation to control the situation near the presidential palace included a small force from the special forces division and the 9th Division of the Iraqi Army. Local sources state that security personnel used stun grenades and tear gas bombs to put a stop to the protests in the Green Zone.

The centre section of the city resounded with the crackle of machine gun fire, and there were reportedly stone-throwing incidents between Sadr’s followers and Tehran-backed soldiers. Following that, a curfew was immediately implemented since Palace security was unable to contain the large number of protesters.

Ayatollah Kadhim al-Haeri, who counts many of al-fans Sadr’s as his followers, retired, prompting Al-Sadr to decide to leave politics, according to a story in Russia Today.

According to reports, Al-Haeri retired from his position as a religious leader due to health issues and urged his followers to support Iranian Ayatollah Ali Khamenei instead of the Shia spiritual centre in Iraq’s holy city of Najaf.

The most recent waves of demonstrations occurred only one month after Iraqi protesters, largely Shia leader al-supporters, Sadr’s stormed Baghdad’s strongly fortified parliament building in July to demonstrate against the nomination of the prime minister by opposing Iran-backed parties.

The demonstrators opposed Mohammed Shia al-candidacy Sudani’s for prime minister because they felt that he had too close of ties to Iran.

Even though Al-group Sadr’s won the parliamentary elections, discussions to create a new administration in Iraq have been at a standstill since last year. In 2016, when his followers staged a sit-in and demanded political reform, similar tendencies were also evident. Over the formation of a new government, there is still no progress.