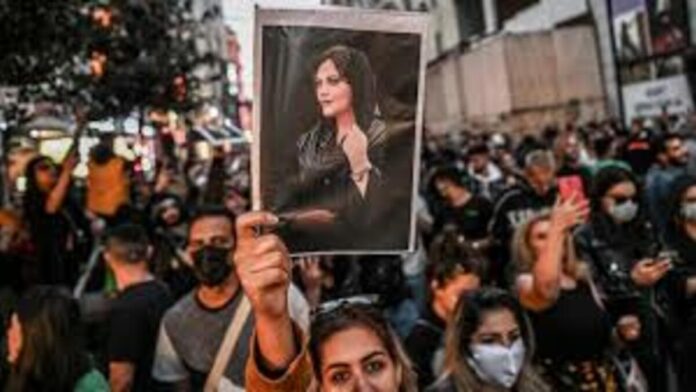 In protests after the passing of Mahsa Amini, Iranian schoolgirls have taken the lead, taking off their hijabs and holding irregular gatherings in defiance of a deadly crackdown by the security forces.

Amini, 22, was declared dead a few days after being imprisoned by the infamous morality police last month for allegedly violating the Islamic Republic’s stringent clothing code for women.

Despite the security forces’ retaliation, which resulted in dozens of deaths and hundreds of arrests, anger that erupted during her funeral escalated to become the largest wave of protests to shake Iran in nearly three years.

After a rally over the weekend, riot police confronted the students and hauled them away from Tehran’s prominent Sharif University of Technology’s underground parking lot.

Since then, schoolgirls around the nation have taken up the cause by taking off their hijabs, yelling anti-regime slogans, and defacing pictures of the leaders of the clerical state.

In a video that has been confirmed by AFP, a group of bareheaded girls can be heard yelling, “Death to the dictator,” in reference to the country’s supreme leader, Ayatollah Ali Khamenei, as they eject a man who appears to be the principal from a school in Karaj, west of Tehran, on Monday.

Another group of females marched through the Karaj neighbourhood of Gohardasht while chanting, “Woman, Life, Freedom!”

“These scenes are just remarkable. The schoolgirls’ involvement in these protests will be crucial if they are to have any success “Esfandyar Batmanghelidj of the news and analysis website Bourse & Bazaar responded through Twitter.

In other videos that were posted online, schoolgirls could be seen sneaking out of their classrooms and participating in flash mob demonstrations.

In a video posted by the social media site 1500tasvir, a rowdy group of girls can be heard shouting “Get lost, Basiji,” in reference to the paramilitary force, towards a man who is standing at a podium in the southern city of Shiraz.

The video could not be independently verified by AFP.

Prosecutor General Mohammad Jafar Montazeri, however, blamed the impact of social media on Wednesday, seemingly acknowledging that schoolgirls have been involved in the protests.

According to Montazeri, according to the ISNA news agency, “the social media is responsible for the fact that 16-year-olds are involved in the events of today.

According to state news agency IRNA, education minister Yousef Nouri stated that “the sharp edge of the enemy’s strikes is targeting the universities and scientific and educational surroundings.”

Iran has detained prominent movement sympathisers and shut off social media in an ongoing crackdown.

Human Rights Watch, a New York-based organisation, condemned internet blackouts on Wednesday and claimed to have independently authenticated 16 videos of protests in which “police and other security personnel are shown employing excessive and fatal force against protesters” in Tehran and other locations.

The rights organisation claimed in a statement that these incidents involve “forces utilising firearms, such as handguns and Kalashnikov-pattern assault rifles.”

According to HRW researcher Tara Sepehri Far, the crackdown “indicates systematic action by the government to squash opposition with brutal disregard for life.”

In the meantime, the court of Iran rejected any connection between the protests and the death of youngster Nika Shahkarami, who was said to have been slain by security personnel.

According to the Oslo-based organisation Iran Human Rights, 92 protestors have died in the turmoil (IHR).

Although the Fars news agency last week estimated the death toll at “about 60,” and HRW stated that it was “certainly much higher,” Amnesty International has confirmed 53 deaths. It has been reported that at least 12 security people have died.

Although more than 1,000 people have been detained, the judiciary reported that more than 620 protestors had been freed from detention alone in Tehran province.

According to IHR, security forces “bloodily crushed” a protest last week after allegations that a local police commander had sexually assaulted a teenage girl from the Baluch Sunni minority in Zahedan, close to Iran’s southeast border with Pakistan, leading to the deaths of another 63 people.

The crackdown has received much criticism.

The European Union and the United States warned Iran on Tuesday that harsh new sanctions were being considered in response to the brutal crackdown.

Hossein Amir-Abdollahian, the foreign minister of Iran, forewarned the EU that it should prepare for “reciprocal action.”

Iran has regularly charged foreign powers with inciting the uprising.

It summoned the British ambassador, Simon Shercliff, on Wednesday to hear a protest on “meddlesome utterances.”

Efforts to resurrect a 2015 nuclear agreement between Iran and major powers have been overshadowed by the unrest. These efforts had come close to success in recent months before stalling once more.

However, according to the White House, efforts to resurrect the nuclear agreement are unrelated to “issues with Iran’s behaviour.”