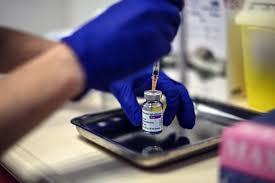 South Africa paused the inoculation of Oxford-AstraZeneca coronavirus vaccine after researchers found out that it was providing “minimal protection” against the new variant of the Covid-19.

The news shocked the countries globally but the WHO and many experts have backed the move by saying that regular reviewing is necessary in the wake of new variants after virus mutations.

However, the AstraZeneca vaccines are produced in India by the Serum Institute of India.

The Health Minister of South Africa said, “Clinicians have been providing anecdotal evidence of a shift in the clinical epidemiological picture – in particular noting that they are seeing a larger proportion of younger patients with no comorbidities presenting with critical illness”.

The statement that said that the Oxford-AstraZeneca “provides minimal protection against mild-moderate COVID-19 infection” from the South African variant, had come from the University of Witwatersrand, Johannesburg.

“A two-dose regimen of (the vaccine) did not show protection against mild-moderate COVID-19 due to (the South African variant),” the study indicated, adding that efficacy against severe COVID-19, hospitalisations, and deaths was not yet determined.

However, the study did not evaluate whether the vaccine properly helped in curing the Covid-19 as people at young age were mostly not considered at high risk.

In its response the AstraZeneca said “it had not been able to properly ascertain the effect of the vaccine on severe disease and hospitalisation caused by the South African variant in the study, given most of the participants were young, healthy adults”.

“We do believe our vaccine could protect against severe disease, as neutralising antibody activity is equivalent to that of other COVID-19 vaccines that have demonstrated activity against more severe disease, particularly when the dosing interval is optimised to 8-12 weeks,” it further said.

On Monday, 8 February in a press briefing the WHO Director-General Tedros Adhanom Ghebreyesus said the WHO Strategic Advisory Group of Experts on Immunisation (SAGE) met and reviewed the Oxforf-AstraZeneca vaccine and the new developments were discussed.