India’s Expectations High In Birmingham After 7 Medals From Tokyo 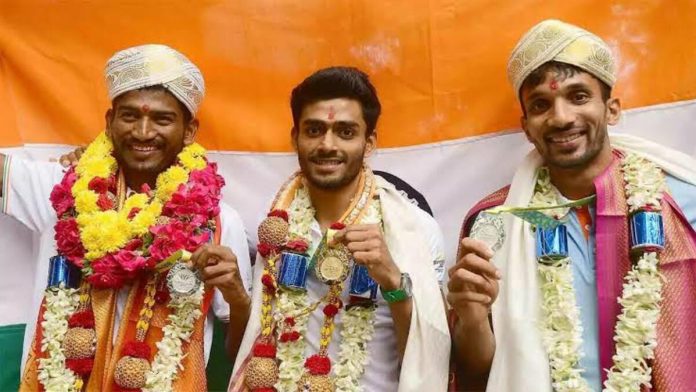 Expectations for India’s delegation to the 2022 Commonwealth Games were understandably high after the country’s unparalleled seven medal haul at the Tokyo Olympics.

Before Birmingham 2022, there was anticipation of medals, but not a flood. Typically, India wins truckloads of medals at the CWG.

The absence of shooting, a discipline where India excels at the CWG level, led to the widespread belief that the total number of medals awarded will drop significantly.

Just two days before the Opening Ceremony, star javelin thrower Neeraj Chopra suffered a groyne injury and was forced to withdraw. The anticipation for the Games had partially subsided in India.

In 2018, India won 66 medals overall, including seven gold, with 16 coming from shooting. Many people believed that India would have trouble winning 50 medals in Birmingham in 2022.

In 2018, India won 66 medals overall, including seven gold, with 16 coming from shooting. Many people believed that India would have trouble winning 50 medals in Birmingham in 2022.

However, the Indian delegation to Birmingham had other ideas. The women’s cricket team, the Lawn Bowls men and women’s teams, the wrestlers, the paddlers, the boxers, the lifters, the shuttlers, the judokas, and the paddlers all lifted their games and brought honour to the nation as India ended the 2022 CWG with a total of 61 medals, including 22 gold.

Lifter Sanket Sargar, of Sangli, Maharashtra, won silver in the men’s 55kg division, which set the juggernaut in motion. Sargar was actually seen on the podium with his right arm in a sling after sustaining a serious elbow injury during his lifts.

When our correspondent arrived in Birmingham, India had already won one of its final 22 gold medals. The leader of the Indian lifting team, Mirabai Chanu, carried a total of 201 kg as if she were lifting shopping bags.

Mirabai served as Jeremy Lalrinnunga’s inspiration, and the backing of his “inspiration” in the fans helped him win another lifting gold the very following day. Achinta Sheuli made sure the weightlifting hall’s winning streak persisted late at night.

The action was moved to Coventry, which is 48 kilometres away from Birmingham, on August 1. After a brief travel on the West Midlands train and a shuttle bus, Judoka Shushila Likmabam’s silver medal was seen just in time.

It was a historic August 2. The travelling Indian media group experienced a shock the day before. Who was aware of the game of lawn bowls? The answer is no. There was a mad rush among journalists to first educate themselves about the rules, regulations, history, previous performances, and then give the information the shape of words when Lovely Choubey, Pinki Singh, Rupa Rani Tirkey, and Nayanmoni Saikia reached the final of the women’s fours team event at the picturesque Royal Leamington Spa’s Victoria Park. The women from India were nothing short of exceptional in this sport, which is essentially a long-lasting legacy of the British Empire. They defeated their highly anticipated South African opponents in the final, coming from behind to give India the historic gold.

The lifters kept up their strong performance. The “thigh-five,” a trademark of the now-assassinated Punjabi singer Sidhu Moosewala, was given by Vikas Thakur after winning silver and Lovepreet Singh after winning bronze as a sign of respect for their “favourite singer” Sidhu Moosewala.

G Sathiyan and Harmeet Desai created the men’s team table tennis gold. Both players triumphed in their individual singles matches before teaming up to win the doubles match.

In badminton, the shuttlers didn’t have the mixed team silver medal permanently etched in their minds. When India lost control of the gold, PV Sindhu was clearly upset. Despite wearing silver, Kidambi Srikanth had tears in his eyes.

India’s first medal in athletics, a bronze in high jump, was given by Tejaswin Shankar. A bronze was as good as gold after all the difficulties he had to face prior to the Games due to numerous “off-the-field” factors. Additionally, it was India’s first-ever high jump CWG medal.

Murali Sreeshankar outperformed himself by winning silver in the long jump competition. He had a chance to take first place, but a slim margin of lcm prevented him.

India received yet another judo silver from Tulika Maan. The 23-year-old, whose mother, an ASI in the Delhi Police, raised her after her father was killed when she was two years old, was inconsolable after losing her last match.

Avinash Sable made sure that there wouldn’t be another Kenya 1-2-3 in the 3000m steeplechase at the CWG from the track and field area at the Alexander Stadium. Sable put up a brave performance to force the eventual gold medalist to the finish line before taking home the silver.

The triple jumpers Eldhose Paul and Abdulla Aboobacker, though, undoubtedly took home the cake. The two Malayalis won the event 1-2, gold-silver, which was a first for Indian athletics.

For the three gold medal-winning boxers, entering the ring was a breeze. During their march toward the gold, Nitu Changhas, Amit Panghal, and Nikhat Zareen barely broke a sweat. Sagar Ahlawat chose silver instead of adding a fourth boxing gold medal. A bronze medal was brought back by Mohammad Hussamuddin, Jaismine Lamboria, and Rohit Tokas.

As a result of his three gold and one silver medals at the Games, TT legend Sharath Kamal’s reputation increased. This includes winning the men’s singles title on the last day after 16 years.

The shuttlers had a blast on August 8, the concluding day of the Games. With a victory in the women’s singles final, PV Sindhu got the proceedings started. Sindhu won a convincing straight match in just 48 minutes, despite having a strapping on her left ankle. Then, with a victory over his Malaysian opponent that required him to dig deep into his reserves, Lakshya Sen gave the nation another gold. Satwiksairaj Rankireddy and Chirag Shetty won India’s third badminton gold of the Games in the men’s doubles category.

High points of the Games for India included the silver medals won by the men’s and women’s hockey teams, both of which lost to Australia in the final.

It’s time to say goodbye to the 2022 CWG and prepare for the following one, which will take place in Victoria, Australia, four years from now.