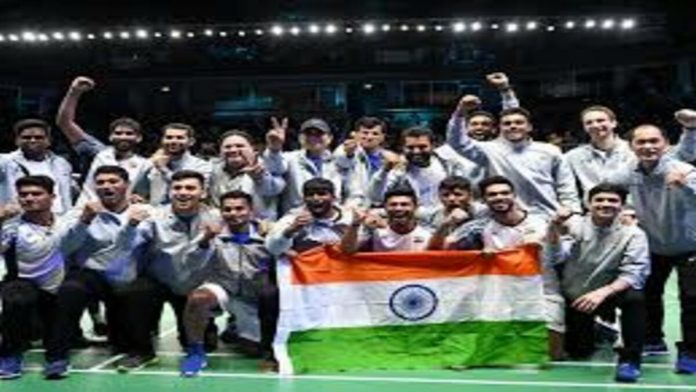 The men’s badminton team overcame 14-time champions and holders Indonesia in the final on Sunday to earn their first gold medal at the Thomas Cup, making it one of Indian sports’ most memorable moments.

India had never even reached the final of the Thomas Cup before, yet they shown steely nerves throughout the match.

Lakshya Sen and the Rankireddy-Shetty doubles duo both came back after dropping their first games.

In truth, Sen had been thrashed 8-21 by Ginting in the first game. However, he fought back to win the second game 21-17.

In the third, the Indians put on a show, wowing everyone with their cat-like reflexes and tenacious defence to win the game 21-16.

The difficult task of going up against Ahsan and Sukamuljo fell to Rankireddy and Shetty. The Indonesians took the first game 21-18.

They went on to take a large lead in the second game, but Rankireddy-Shetty battled back to win it 23-21 after saving four match points.

The championship game was a tight encounter with nothing separating the two teams, but the Indians held their nerve to give the squad a 2-0 lead.

Then it was Srikanth’s turn. The shuttler had been in excellent form throughout the tournament and had returned to the festivities.

He finished the first game against Christie in in 19 minutes. Srikanth was leading 11-8 during the mid-break interval in the second game.

The Indonesian, on the other hand, rallied to take a 16-13 lead, but Srikanth hung in there and refused to give up.

Srikanth then saved a game point at 20-21 before sealing the game and the match for India, giving them a remarkable victory.