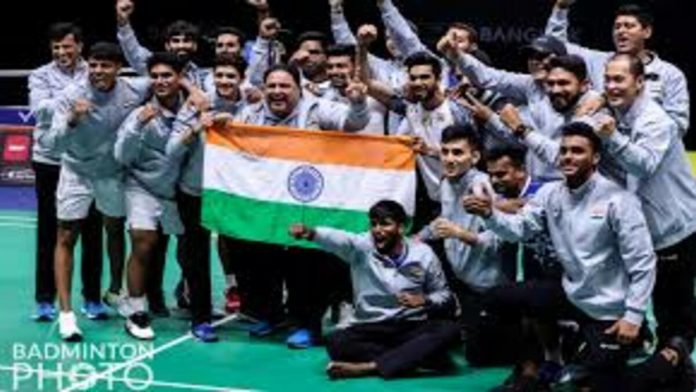 After a historic 3-2 semifinal victory against Denmark in Bangkok, India will face 14-time Thomas Cup champions Indonesia on Sunday.

Indonesia will be the equivalent of Australia in cricket in the 1990s: defending champions and unstoppable in the important team sport, having won the most titles. But, in terms of pure boldness — and the idea that they can make the finals of a competition that powerhouses Indonesia, Malaysia, China, Japan, and Denmark have prioritised over every other event — this unheralded Indian badminton team mirrors the 1983 World Cup cricket side.

It’s a belief shared by both the players and the coaches who have worked with this group for a long time. India had never made the semi-finals in this format before Friday.

As the stars aligned to drive India into the top tier of badminton, seasoned and technically sophisticated strokes, developed over years of playing, were finally matched with outstanding planning and strategy. India has won multiple individual titles, but the Thomas and Uber Cups informally validate a country’s credentials as gold-standard in the shuttle world.

Kidambi Srikanth and H S Prannoy in singles and, more importantly, Satwiksairaj Rankireddy-Chirag Shetty in doubles — the poster boys of Indian men’s badminton — once again rose up to be counted. They’ve all finished in the Top 10 and advanced to the circuit finals. Nothing, however, stamps a true hero in badminton like guiding his country to the Thomas Cup final.

India’s finest singles player, Lakshya Sen, absorbed the attack of Olympic champion Viktor Axelsen despite losing in straight sets against Denmark. The doubles combo of Satwik and Chirag, like the quarterfinals versus Malaysia on Thursday, brought India into contention, with Chirag’s bobbing, bouncing yellow headbanded figure exploding on the front court.

Chirag, the Mumbai lad, played with such ferocity that a 20-18 second-set advantage that they squandered did not derail their chances. Chirag possessed snappier racquet angles and louder roars than Astrup-Christiansen, and was affectionately known as “Google” for remaining up to current with information from the search engine. As they won the decisive, he eventually convinced Satwik to bring out his own thunderous game.
Despite the fact that India’s second doubles team was eliminated, Srikanth and Prannoy were tasked with winning two key singles matches against opponents who were rated higher than them — Antonsen and Gemke. The singles victories were based on two sets of games in which the aggressive strokeplay of two experienced 29-year-olds was balanced by the poise of two experienced 29-year-olds.

More than anything, Friday’s performance will be remembered as the triumph of India’s united team, free of the normal rivalries and factionalism between Hyderabad, Bangalore, and Mumbai – the players get along famously, bonding over PubG and street style dancing.

Vimal Kumar, who had dreamed of playing in a Thomas Cup final after hearing stories from buddy Prakash Padukone, was among the support personnel. Mohammad Siyadatullah, a friendly coach from Gopichand’s academy who has coached Srikanth, Prannoy, and Satwik-Chirag since they were teenagers, was also present for the important singles today. Veteran coach Vijaydeep Singh and youngster Arun Vishnu, who has coached the doubles players, were also part of the planning team.

“It was made apparent to the players from the start that we had a well balanced squad, and each player has beaten the top in singles and doubles.” As a result, we wanted to think that we were on par with any of the previous Thomas Cup winners,” Vimal Kumar explained.

“Coaches and players would meet before and after the group matches to openly discuss the composition of the team we would field.” The coaches made sure that players had enough time to prepare for their matches, taking into account the opponent’s strengths and weaknesses,” he stated.