India Bounce Back With An Unexpected Win Against England 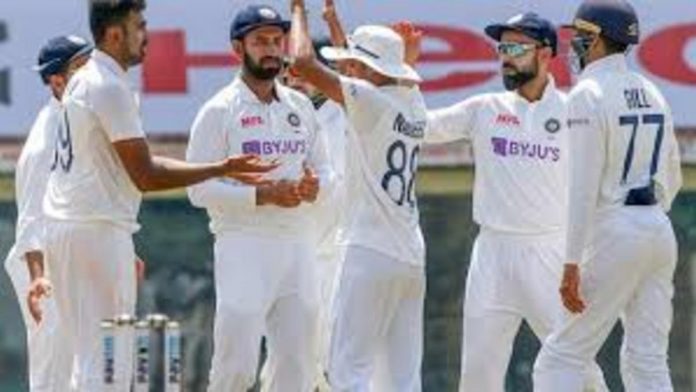 It was all over about 40 minutes into the final session. After nicking Umesh Yadav behind the wicket, James Anderson sought for a review with a glint in his eye, postponing India’s celebrations for a moment. Virat Kohli and Rohit Sharma exchanged embraces after Ultra-edge spiked. The 157-run victory, which put India 2-1 ahead in the series, will go down as one of India’s most memorable victories. After being knocked out for a sub-200 score in the first innings at The Oval, they bounced back.

This was the pinnacle achievement for Indian fast bowlers. They’ve assisted their team in winning games all across the world, from Johannesburg to Melbourne to Lord’s. However, on a fifth-day Oval wicket that was flat and sluggish in nature, with batting-friendly circumstances, what Jasprit Bumrah and his teammates produced will be remembered for a long time. “This is among the top three bowling performances I have witnessed as India captain,” Virat Kohli said at the post-match presentation.

England collapsed for 210 in their second innings after resuming at 77 for no loss in the morning. After lunch, Bumrah bowled the best stint of the series, surrendering only six runs in as many overs and dismissing Ollie Pope and Jonny Bairstow to put the tourists in a position to win the Test. His numbers in the second inning were 22-9-27-2. He was the crown jewel, but Shardul Thakur and Yadav’s responses to the challenge were even more inspiring. Bowling full was required on an unresponsive surface. The quick bowlers were spot on with their predictions.

Ravindra Jadeja was supposed to be England’s tormentor-in-chief going into the last day of the fourth Test. The left-arm spinner made a significant contribution to the victory, but Shardul’s Test will be remembered in the future. India had no chance without his half-century in the first innings. In the second, another fifty transformed the game. Finally, when it counted most, the medium pacer elevated his game to dismiss Rory Burns and the seemingly indestructible Joe Root.

Umesh, who returned with a six-wicket match haul in his first Test in nine months, also deserves special attention.

India’s run-choke began to affect the game in the opening session. The England openers were put off by Jadeja’s precision and usage of the rough. Burns got to 50, but Shardul’s gem of a delivery got the better of him, the ball angling in before seaming away.

India tightened the screws, making England uneasy. Haseeb Hameed tried an unusual slog against Jadeja, but Mohammed Siraj dropped a dolly at mid-on. The hosts reciprocated with an unnecessary run-out of Dawid Malan, a dismissal that screamed T20 cricket. In any case, the left-handers weren’t going to have a good day on the last day, as they didn’t stand a chance against Jadeja.

Hameed’s obstinacy was a source of concern. India’s planning, on the other hand, shone through. Jadeja struck the rough outside the batsman’s leg stump with pinpoint accuracy from over the wicket, and Hameed eventually made the mistake of opening the bat face. The stump on the opposite side was knocked back. Bumrah took over after that.

As Pope approached the crease, Kohli made it plain that only one outcome was imaginable. Every word was spoken within earshot of Pope. Bumrah was able to get the ball to reverse at a high rate, causing England to stumble. Kohli later disclosed during the presentation that the bowler sought the ball from his captain.

Pope was castled by a huge nip-backer; it was Bumrah’s 100th Test wicket. Bairstow had the game’s best ball, a reverse-swinging yorker that went straight through the middle. Root’s scalp was almost shaved off by a similar delivery, but the toe end of the bat saved the England skipper.

In the meantime, Jadeja worked over Moeen Ali, a ball that had turned from the rough into a left-hander. The hosts went from 141/2 to 147/6 at one point. But Root remained, and it appeared that India would wait for the second new ball before making a final push. Kohli, on the other hand, did not take the second new ball after 80 overs, instead bringing in Thakur. And, as his followers nickname him, Lord Shardul, India’s win was all but assured from the first ball. Root persevered despite the pitch’s slowness and the old ball’s softness.

Kohli’s captaincy was outstanding. The skipper didn’t put a foot wrong in this Test, from his game-reading – his comment at the toss about Jadeja’s role – to his bowling changes and field placements. He created a leg-trap and told his bowlers to go after the stumps, knowing that off-side dismissals would be uncommon without lateral movement.

Kohli’s expression oozed joy when Chris Woakes went into the leg-trap while attempting to clip Yadav off his toes. He had been criticized for not playing Ravichandran Ashwin, and it appeared that he had made the wrong decision until Day Four. But Kohli had the last laugh, through a tactical masterclass.

After being probed by Cricket Australia for emailing a coworker an explicit image of himself along with a slew of inappropriate messages, Tim Paine...
Read more
SPORTS

On Sunday, Australia won their first T20 World Cup title with an eight-wicket victory over New Zealand in a title match that was dominated...
Read more
SPORTS

India closed down from the ICC T20 World Cup 2021 with a positive outlook on Monday as they beat Namibia by 9 wickets in...
Read more
- Advertisement -