India Among 13 Countries To Vote Against Russia In UNSC 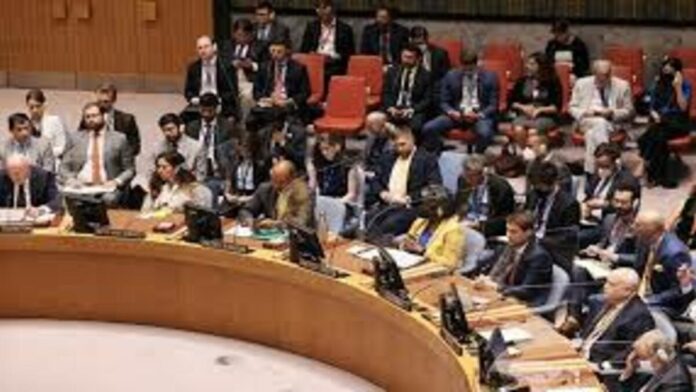 After the Russian military intervention started in February, India has never before voted against Russia on the topic of Ukraine. New Delhi has so far refrained from voting on Ukraine at the U.N. Security Council, much to the chagrin of the Western powers led by the United States.

Following the aggression, Western countries, especially the United States, sanctioned Russia severely on the economic and other fronts.

Russia’s actions towards Ukraine has not received criticism from India. The Russian and Ukrainian sides have been urged to resume the path of diplomacy and negotiation on numerous occasions, and New Delhi has reaffirmed its support for all diplomatic attempts to put an end to the crisis between the two nations.

India has a two-year non-permanent membership in the UNSC that expires in December.

On the 31st anniversary of Ukraine’s independence, August 24, the UNSC met to assess the conflict, which has been going on for six months now.

Vassily A. Nebenzia, the Russian ambassador to the UN, asked for a procedural vote to approve the Ukrainian president’s attendance in the meeting via video teleconference as the meeting got underway.

By a vote of 13 in favour to 1 against, the Council invited Mr. Zelenskyy to join the meeting via video teleconference following remarks from him and Ferit Hoxha of Albania. China abstained, and Russia voted against the invitation.

Russia does not object to Mr. Zelenskyy’s involvement, Mr. Nebenzia insisted, but such participation must be in person. He claimed that although the Council decided to conduct virtual sessions during the COVID-19 epidemic and return to the temporary rules of procedure after the pandemic’s height, these meetings were informal.

Insisting once more that his nation’s objections specifically concern the President’s participation via video teleconference, he demanded a procedural vote on the subject. India and 12 other nations disagreed with this request and backed Mr. Zelenskyy’s decision to address the Council via videoconference.

Mr. Hoxha of Albania said that because Ukraine is at war, the President must be present there to deal with the issue. He encouraged other members to support Mr. Zelenskyy’s participation through video teleconference due to the special circumstances surrounding this issue.

Mr. Nebenzia regretted that Council members had voiced their opposition to adhering to the organ’s regulations. He expressed disappointment that other participants had helped to undermine the Council’s core principles and procedures, adding, “We can understand the rationale of Kyiv’s Western allies…

Soon after, Mr. Zelenskyy demanded that the Russian Federation be held accountable for its acts of aggression against Ukraine in his remarks during a videoconference. All of these Russian assassins would unavoidably end up in other nations, he said, if Moscow is not stopped immediately.

The future of the globe will be decided on Ukrainian soil, he continued. He told the UNSC, “Our independence is your security.”

According to Mr. Zelenskyy, Russia turned the Zaporizhzhia nuclear power station into a battlefield, putting the entire world in danger of a nuclear holocaust. The International Atomic Energy Agency (IAEA) needs to take permanent supervision of the issue as soon as possible because the plant has six reactors, just one of which detonated at Chernobyl.

The president of Ukraine urged Russia to end its “nuclear blackmail” and entirely leave the plant.

The situation inside and surrounding the Zaporizhzhia nuclear power facility has Antonio Guterres extremely concerned, emphasising that “the caution lights are blinking.”

He declared that any actions that might jeopardise the plant’s physical integrity, safety, or security are unacceptable and warned that any further escalation of the situation could result in self-destruction. He also called for the IAEA to send a mission as soon as possible and for the security of the plant to be guaranteed.

Concern over suspected transgressions of international humanitarian law was another issue raised by Mr. Guterres.

Asserting that “Russia’s goal is as clear as ever: to dismantle Ukraine as a geopolitical entity and erase it from the world map,” U.S. Ambassador to the U.N. Linda Thomas Greenfield.

In order to get ready for further attempts to invade Ukrainian land, she claimed that the group’s disinformation campaigns were becoming more and more weaponized.

She informed the U.N. Security Council that the international community would never accept Russia’s attempt to forcibly alter Ukraine’s borders.

She claimed the Russian Federation carelessly assaulted and forcibly took control of the site, threatening nuclear catastrophe, despite Ukraine’s unblemished record of nuclear energy safety and security at the Zaporizhzhia nuclear power station.

The “so-called filtration operation” by Moscow, which entails the systematic and coerced deportation of citizens from Ukraine to off-the-grid regions of the Russian Federation, alarmed the American envoy.

Speaking at the event were representatives from France, Ireland, Norway, the United Kingdom, Gabon, Ghana, Mexico, and China as well as the European Union in its position as observers.