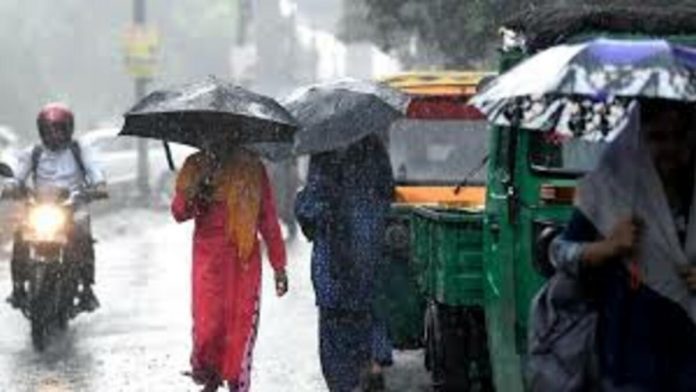 On Tuesday Delhi-NCR got a relief from sultry heat after rainfall, further thunderstorm with showers has been forecasted by the Indian Meteorological Department for July 13.

Along with National Capital Region, Monsoon has hit several other parts of the country. The heavy rain has affected life in Telangana, while heavy rains and flooding situations in Maharashtra, Gujarat and Madhya Pradesh have registered 18 deaths so far.

Thousands of people are affected by floods in Assam and Karnataka. While, parts of Rajasthan have reported light to moderate rainfall.

The IMD has predicted heavy rainfalls for Mumbai, Thane, Palghar and Raigad and an orange alert has also been sounded in these areas. Mumbai is going to see wet days as continue rain with moderate intensity is predicted for next couple of days.
Intense rainfalls in areas like Wardha, Gondia, Bhandara and Nagpur is also likley.

Three people died in Nagpur and many went missing after a SUV in which they were travelling was swept away while crossing a flooded bridge. Out of total eight passengers in the SUV two were saved as they knew swimming. All the passengers were from Madhya Pradesh.

Showers in Delhi also cut down the mercury however caused waterlogging in many areas of the city where the base settled at 26.2 degrees Celsius, a below normal. More rainfall is predicted for today.
The IMD has also predicted moderate to heavy rainfall in several parts of NCR like Ghaziabad, Noida, Greater Noida, Dadri and Chhapraula.

Meanwhile, the IMD has issued red alert for many districts of Gujarat which include Navsari, Tapi, Dang, Valsad, Surat, Chhota Udepur, Rajkot, Narmada, Jamnagar, Morbi, Devbhumi Dwarka and Kutch. Heavy to very heavy rainfall is predicted for these regions.

Heavy rainfall covered more areas of Gujarat where six individuals lost their lives due to the rain caused incidents in last 24 hours taking the total toll to 69 since June 1. A sum of 27,896 individuals were taken to safe placed from flood-impacted regions and 18,225 of them stayed in shelters while the others have returned back to their homes, said the state Disaster Management Minister Rajendra Trivedi.

Since, Monday parts of Rajkot and Kutch have been receiving heavy rainfall. Districts in South Gujarat have been heavily affected by the rainfall.

For Telangana, the IMD has forecasted heavy rainfall in several parts of the state for next three days.

As the Hussain Sagar lake in the heart of state capital Hyderabad is almost full due to heavy rains for last few days, a risk of flooding in the capital is likely. Schools and colleges have been shut for last two days due to the owing to the raining conditions.

Around 10 villages have been immersed and temporary bridges have washed away in the Adilabad district due to heavy rainfalls.

Two young men were just saved at the verge of dying as they got washed away while they were crossing a river in Neradingonda.

Meanwhile, Karnataka Chief Minister on Tuesday took stock of the situation caused by the heavy rains in Kodagu district. Sea erosion has affected the livelihoods of the people living at the coastal regions of the state and houses alongside the river banks have been damaged, said CM Bommai.