IMD Issues Alerts Amid Flooding In Kerala, Karnataka And Landslide In TN 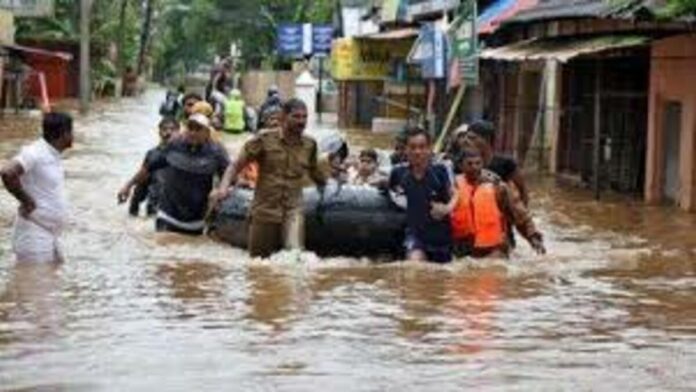 Heavy rainfall alongwith lighting and thunderstorm is expected in Andhra Pradesh, Karnataka and Tamil Nadu on 8 and 9 September, while ‘very heavy rainfall’ is predicted in Lakshadweep, Kerala, Telagana and coastal Andhra Pradesh by the India Meteorological Department (IMD).

In Bengaluru, there has been constant raining which has led the lives of civilians, stray animals and cattle to standstill. In the visuals being circulated from Varthur, people were seen commuting through boats due to massive waterlogging in the areas.

These waterloggings have not only blocked the routes but have given rise to problems of big traffic jams in many areas.

Many employees of IT sector were seen commuting to their offices by tractors in an unusual way in Yemalur region of Bengaluru.

“Our work is being affected. We are awaiting tractors to drop us for Rs 50, ” said the employees.

Following the expression of their issues, the Karnataka Chief Minister Basavaraj Bommai on Monday ensured that the grievances of the IT employees are heard and suitable redresses will be made towards the problems being faced by the waterloggings.

The areas which have been worstly affected due to the prevailing conditions include Sarjapura Road, Outer Ring Road, Bellandur, BEML Layout and Whitefield.

Since last week, Bengaluru has been witnessing heavy rainfall resulting in flood-like situations in many areas mainly in IT sector. Fishermen have been advised not to venture our and also the residents were asked not to step out.

Meanwhile, in Kerala two people including a eight-year-old lost their lives after they were swept away in the floods in Mankayam waterfall near capital Thiruvananthapuram.

On Sunday a flash flood occured, where around 10 people visited. Eight out of them were tied to a rock, two of them could not and they were swept away.

The India Meteorological Department has now flagged a red alert in Thiruvananthapuram, Pathanamthitta, Idukki and Kollam for September 6. Orange alert have been issued in Ernakulam, Alappuzha and Kottayam.

Tamil Nadu withnessed irregular rainfall in many parts throughout the Sunday night. Following this, a landslide was triggered by the State’s Nilgiri district in Mettupalayam-Udhagamandalam region.
This had affected the transport and various other services on Monday.