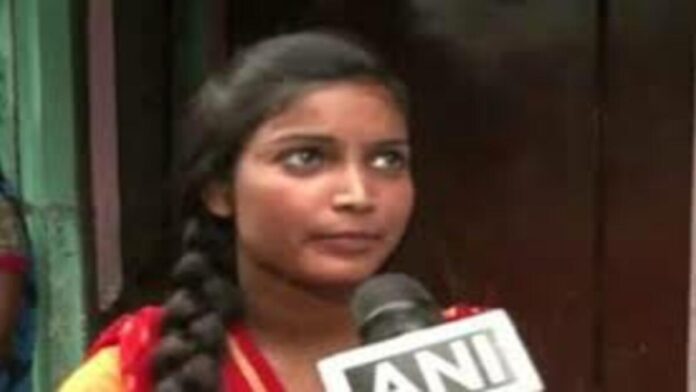 Riya Kumari, a Bihar school student, posed the question in an exclusive interview with a news agency on Thursday. “If politicians can spend millions and crores on gifts and freebies for people’s votes, why can’t a basic item like a sanitary napkin be supplied for free?” she said. She asked a similar inquiry this week, and the female civil official Harjot Kaur Bhamra’s unexpected response made headlines and aroused disgust across the country.

“You’ll claim that the government can also provide jeans tomorrow. Why not follow that with some gorgeous shoes? You will soon expect the government to provide you with family planning tools and condoms, the IAS officer stated in a viral video.

Riya, who was present at the UNICEF, Save the Children, and Plan International event held on September 27 at the Hotel Maurya in Patna, told a news outlet that the officer should have reacted more tactfully.

“We had gone there to talk about our issues. We were unaware of sanitary pads, but after we learned about their advantages, we began to use them. Thousands of girls in the slums where we live cannot afford sanitary pads. We wanted it to be made free at least in schools because the government currently provides so many subsidies, scholarships, and other benefits. We have also been bringing up this demand with other leaders. They can decide whether to take this into account, the student stated.

According to the most recent National Family Health Survey (NFHS-5), only 59% of women in Bihar use a hygienic method of menstrual protection, and nearly 23 million girls in India drop out of school each year after they begin having their periods due to a lack of access to menstrual hygiene facilities.

In the video, Bhamra yells at Riya, “This is heights of idiocy. Don’t vote, then. Become Pakistan. Do you vote for money and services?” It should be noted that Bhamra previously served as the principal secretary for the department of science and technology.

The student informed that what the IAS officer claimed was incorrect. “We are Indian. Why establish Pakistan? She spoke as she saw fit. But if politicians can give away presents and money in the thousands and seek for votes, why can’t they give away such a cheap but necessary item? Is it true that only those who vote will have their desires met? What about girls who aren’t yet of voting age? Will their issues and demands go unanswered? “She enquired.

The National Commission for Women (NCW) has taken notice of the situation, and its chairman Rekha Sharma has asked the IAS official to respond to her comments within a week.

Riya stated, “The population is high here, so it’s very difficult for people to spend on sanitary pads. If there is so much discussion over 20–30 rupees, then the government should roll back all kinds of yojanas (schemes) in which crores are spent on marriages, scholarships, and in the Beti Padhao Yojana.

Bhamra apologized in writing on Thursday. We were able to talk to her about the situation as well.

“We were discussing a large number of issues since morning with all the girls present over there,” the officer said. “The government is giving money to all the girls for sanitary pads through DBT since 2014–15 and even our department is giving sanitary vending machines and sanitary installation machines to high schools.

Bhamra maintained that her goal was to avoid offending anyone’s feelings. The CMD of the women and child development corporation said, “And if anyone’s sentiments have been hurt, of that girl or any other girl in the country, or in the state, I would definitely express my regret for that, but I would also like to say issues were reiterated again and again and we were talking in that particular manner…But, yes, if my words have hurt anyone, I express my sincere regrets,” she said.

In response to media reporting on the problem, Nitish Kumar, the chief minister of Bihar, said that the situation was being watched and that if anything went wrong, it would be addressed.

When she encouraged us to become independent, Riya said, “We were impressed.” But when we made a sincere inquiry, it devolved into a contentious argument that we had not expected. In fact, we favor having more conversations of this nature to ensure that our opinions are heard. Additionally, the government and officials ought to give thousands of females like us considerable consideration.