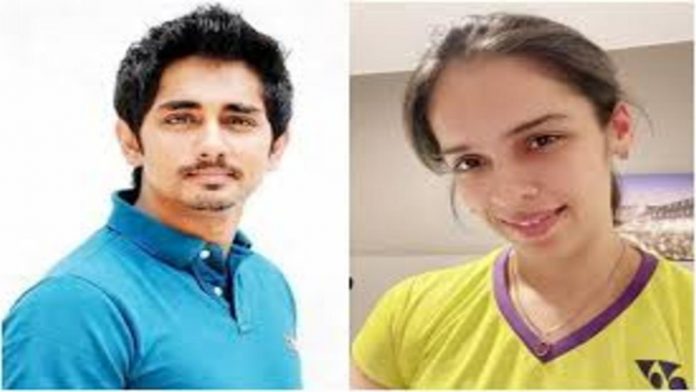 Actor Siddharth continues to be haunted by his supposed sexual innuendo in his comment on badminton champion Saina Nehwal. Based on a complaint filed by BJP leaders Neelam Bhargava Ram and Prerna T, the Hyderabad Police have now filed a new FIR against actor Sidharth.

The actor has been charged with violating Sections 67 and 509 of the Indian Penal Code.

Siddharth has been under fire for a tweet he sent in response to Saina Nehwal’s tweet on Prime Minister Narendra Modi’s security failure during his visit to Ferozepur, Punjab, on January 5. Many internet users and celebrities chastised the Tamil-Telugu actor for his “crass” language.

He, on the other hand, justified his post, claiming that no disrespect was meant, stated, or implied. On Wednesday, Siddharth apologised publicly for his “rude joke.”

Siddharth wrote on Twitter in an apology letter, “Dear Saina, I’d like to apologise for the stupid joke I made in response to one of your tweets a few days ago. I may disagree with you on many issues, but my disappointment or anger when reading your tweet does not excuse my tone or language. I’m sure I’m capable of more elegance. In terms of the joke, if it needs to be explained, it wasn’t a particularly funny one to begin with. Please accept my apologies for a joke that did not land.”