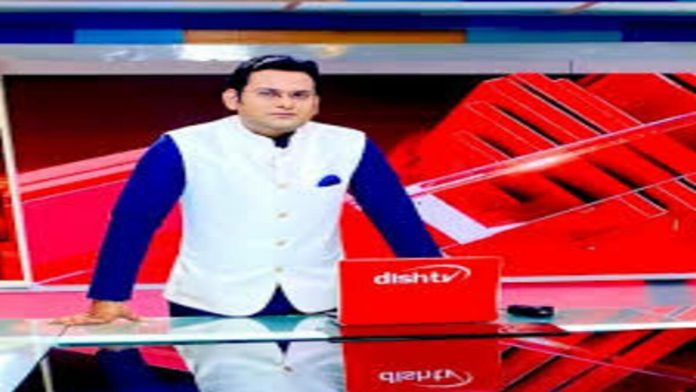 Tuesday morning, a squad from the Chhattisgarh Police arrived in Ghaziabad to arrest TV news host Rohit Ranjan for allegedly airing false information about a statement made by Congressman Rahul Gandhi.

In a dramatic change of events, the Raipur police were allegedly hindered by their Uttar Pradeshi counterparts, who took Mr. Ranjan with them for interrogation in relation to a First Information Report (FIR) filed in Gautam Buddha Nagar about the same misleading video by Zee News.

Mr. Ranjan had not yet appeared in court and was still being questioned by the Gautam Buddha Nagar police as of late. The Chhattisgarh Police stated that they were pursuing legal options to obtain his custody in the interim.

The event turned into a political controversy when the Congress accused the government of Uttar Pradesh of intentionally interfering with an ongoing inquiry in order to protect an accused. It claimed that this was the second occasion that a police force answering to a BJP government has prevented an accused person from being arrested by the police of a State not run by the BJP, following the standoff between the Delhi and Punjab Police over the arrest of BJP politician Tajinder Bagga.

When the team arrived at Mr. Ranjan’s residence in the Indirapuram neighborhood of Ghaziabad with non-bailable warrants issued by a Chief Judicial Magistrate court in Raipur, according to Udayan Dehar, Deputy Superintendent of Police, Raipur, who was leading the team, the journalist did not cooperate and dialed the police from the neighborhood police station.

“Even when we presented them with the warrant and our identification cards, the police officers prevented us from putting him into jail. Mr. Ranjan was taken away in a personal car. We were pushed aside when we objected. He had already been relocated by the time we arrived at the Indirapuram Police Station, according to Mr. Dehar.

According to police sources, Mr. Ranjan was originally transported to Noida’s Sector 20 police station before being transferred to an undisclosed location.

Mr. Dehar added that the Chhattisgarh Police would approach the court and that it was improper to remove an individual against whom non-bailable warrants had been issued for questioning. He said senior police officials in Ghaziabad could not be reached but they had submitted a complaint via e-mail.

The Gautam Buddha Nagar police were after Mr. Ranjan, according to Nipun Agrawal, Superintendent of Police (City), Ghaziabad, and they had just helped facilitate the process.

The Hindu was informed by Ranvijay Singh, Additional Deputy Commissioner of Police, Noida, that Mr. Ranjan had been held in relation to a FIR filed on Tuesday morning by the Zee management against two producers under Section 505 (2). (statements creating or promoting enmity between different classes). He acknowledged that Mr. Ranjan’s arrest by the Chattisgarh Police was being sought in connection with the same allegedly doctored video. The name of Mr. Ranjan has also come up during questioning, and his organization has filed a complaint asking for a probe into his involvement, according to Mr. Singh.

After the interview, it would be determined if he needed to be detained and brought before a judge, according to Mr. Singh. “The length of the questioning depends on the seriousness of the charges. Many facts in this case need to be verified, Mr. Singh stated while declining to reveal Mr. Ranjan’s location.

They had to answer to the State administration, according to Mr. Singh. The two teams arriving at the same moment for the same investigation was only a coincidence, he claimed, adding that the U.P. Police respected the rules.

Senior Congress politician Jairam Ramesh responded to the development by claiming that the U.P. Police had “deliberately interfered” with an existing inquiry to “protect an accused.” Without reason or justification, they exploited state apparatus to shield a person accused of major crimes from an appropriate investigation. What is it that their political overlords fear may come to light during an investigation? Ramesh enquired.

Mr. Ramesh referred to it as a deliberate violation of the court’s warrant by the U.P. Police and its political overlords, adding that this was happening twice now as the BJP used the police force to protect serial offenders from proper investigation and inquiry. “What is this nexus about which the BJP is so concerned? He questioned, “Why doesn’t the BJP want those who spread false information, which might lead to major public disturbance, to face consequences?

“We received an arrest warrant from the honorable court and we went to the accused’s house to execute it and had taken him into custody,” Additional Superintendent of Police (Raipur City) Tarkeshwar Patel said in Raipur. However, the local police did not assist our team there and instead made it difficult to make the arrest. Our group is still camped there, and we will follow up with the appropriate legal measures.

In the evening, police sources stated that they were pursuing a “wait-and-watch” strategy while attempting to get in touch with the Noida and Ghaziabad Police. The Ghaziabad Police informed them that Mr. Ranjan had been taken by the Noida Police but that the Chhattisgarh Police were unable to locate him, the official continued. “We attempted to present the notification letter to the police stations and higher authorities, but they rejected it. Another officer added, “We then wrote emails to Noida and Ghaziabad police and are now waiting for the response,” adding that they were looking into “all legal measures” to end the impasse.