A portion of Scheduled Caste, Scheduled Tribe and Adivasi votes in the western and northern parts of the state had shifted to the BJP in 2019, giving it a chunk of the 18 parliamentary seats it won in the state. 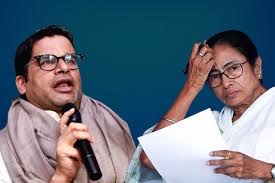 As per the speculations he has his hands in candidate selection also. The Indian Political Action Committee (IPAC) said that he is acting as major force in getting the votes which have moved away and also helping in identifying the party’s week points so that they can be beefed up.

The IPAC is also focusing on the programs and activities which can bring more votes to Trinamool like reaching out people and leaders and on developing projects. At one of those programs the Bengal Chief Minister and TMC supremo Mamata Banerjee made an statement saying, “I am appealing to my brothers from the SC/ST and Adivasi community. They (the BJP) have won a lot of your seats. They have won in Junglemahal and North Bengal. They have won so many MPs. Have they given you anything?”

Mamata Banerjee’s flagship scheme “Duarey Sarkar” has distributed over 10 lakh caste certificates for the Scheduled Castes and Tribes within a month. This initiative has to reach the ground and the IPAC comes into the picture here, Trinamool leaders say.

The IPAC is closely working with the party’s SC/ST cell leaders to bring back the Scheduled Caste votes the BJP has been eyeing.

President of Trinamool’s cell for the Scheduled Castes, Dr Tapas Mandal, said: “When a political representative goes to the people, he may not get the entire truth. But when an independent agency goes to the people, we will get unbiased information.”

The IPAC is also helping the party stand against the BJP’s bombardment of advertisements and videos on social media and WhatsApp. From providing feedback from the ground to regular updates on concerns of voters, it is also keeping the party’s top leadership updated. Party leaders say Mamata Banerjee is also aware the BJP troll army’s relentless attack on her is helping it polarize the state.

IPAC teams are also educating district-level leaders about the pitfalls of social media blunders. Booth-level workers are being advised to attend training sessions on weekends to familiarize themselves with the party’s social media strategy.

The IPAC is also helping Trinamool run a directed campaign.

For example, in one block of Kalyani, where the Trinamool has to recover ground, a key trouble area was pending land deeds for residents. That feedback was shared with the party and the local leadership has managed to sort out the issue.

Now the message that the government has been of help in a predominantly Scheduled Caste area is now spreading through word of mouth.

“We have taken the “Duarey Sarkar” programme to the people’s doorstep. People here were waiting for the land certificates for years. Recently Mamata Banerjee had given these people her word and now they have been given land ownership documents,” Pankaj Singh, Kalyani Block President, Trinamool Congress told NDTV.

Arjun Datta, who works with IPAC, said: “We are force multipliers. The party’s leadership, the party’s grassroots leaders are the individuals who will go into the communities and convince people to support the Chief Minister and the party’s programme.”

There, however, are critics of Mr Kishor as well. Those who have been expelled from the party like Baishali Dalmiya, say Prashant Kishor hasn’t been able to do what he set out to.

Leaders like Suvendu Adhikari have also blamed him for their departure — a stance the party has vehemently objected to. Suvendu Adhikari had “plans to join the BJP with 35 MLAs and try and become Chief Minister,” party MP and its youth wing chief , Abhishek Banerjee said.

tokyohot jav 083PPP-2439 10 big pie sisters! - Boobs Purunpurun Explosion Iki Demon Saddle DX (5) PRED-395 I was jealous of my childhood friend who knew about cosplay customs, and I got 10 or more shots with a reverse bunny etc. - Aika Yamagishi TPIN-030 Affair Voyeur [Raw Dokyu God Time] Female boss and handsome sales subordinate skip work and hotel from noon 259LUXU-1582 Luxury TV 1563 A Beautiful Wife Of A Newly Married Hoya Hoya Appears On AV Without Her Husband's Care! - While showing tension and embarrassment, I was excited by the sticky caress! - If you welcome a big cock that you tasted like love, you will pant while leaking an annoying pant voice! - !! 345SIMM-730 The salt-friendly blonde gal was tide-friendly when she took it off! - Massive firing with uncle chin piston to erotic body of fair-skinned beauty big tits!