How Government Power Is Impacting The Cultural Art In West Bengal ? 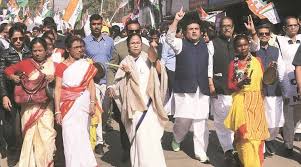 What makes a true intellectual? What defines them?

Slowly, yet steadily, this interesting debate is arising out of the hubris in election-struck Bengal. The moot issue is simple: How much of intellect makes you a true intellectual. And more importantly, are you free to do what you want?

And, then, comes the million-dollar question: Are you an intellectual to visit Bengal, and rule?

The debate over outsiders, free expression and the limits of acceptable opinion is high in the state. The ruling Trinamool Congress (TMC) says Bengal may not have produced a Prime Minister but enough Nobel laureates.

All kinds of examples are now being cited by the state’s ruling party. Consider this one. Once, a double decker bus squeezed into a bylane to drop a person right at his doorstep because the passenger was high on liquor and unable to alight. The driver, then claimed many, did it only because the lone passenger was a top poet. Many have often compared Kolkata to Paris, taken pride in not speaking in Hindi, the national language.

But now, troubled by the rise of the ring wing in the state, perhaps, film actors, theatre stars, poets, and painters have joined hands in Bengal to say the lifeblood of a liberal society can withstand a lesser evil (read Mamata Banerjee’s Trinamool Congress) but not the most dangerous of them all: the Bharatiya Janata Party (BJP).

It is worth your while to remember that this same set of people had derided Mamata Banerjee for lacking in intellect when she came to power in 2011.

“The BJP is entering into my mindset, taking away my freedom and my intellectual space. The party is telling me what is right and what is wrong. That decision is – actually – mine. No one can dictate me,” Kaushik Sen, one of Bengal’s top actors, told in a telephonic interview.

Sen said the Jai Shri Ram slogans at a function in Kolkata to commemorate the birth anniversary of Subhas Chandra Bose, considered by many as India’s biggest patriot, made him realise that the BJP must be stopped at any cost. “As an actor I need room for experimentation, risk taking, even mistakes.”

So what does that exactly mean? Will free speech die in Bengal if the BJP sweeps to power this summer? No one is saying a definitive yes, everyone is saying beware, beware, beware of the BJP, the party is like the Phantom, the ghost who walks.

Veteran poet Joy Goswami said he feels free speech could be stifled if BJP rules the state. Art and politics will have a greater chance to mix if the right wing comes to power in Bengal and the BJP will surely push its agenda of Hindutva. “Will a poet have his freedom, I doubt it very much,” said Goswami.

Locals say Goswami, a well-known poet and author, had aligned himself with the TMC when the party swept to power in 2011. Earlier, he was a routine fixture at all cultural events organised by Bengal’s ruling Left Front. Now, he is often seen at TMC events, especially those attended by CM Mamata Banerjee. His presence at a December 24, 2019 event of the TMC where the CM gave a crow-like call to decry the BJP’s move to push the National Register of Citizen (NRC), had surprised many.

But Goswami remains unflustered. He said his presence on a political platform should not worry anyone as long as he was free to talk. “The BJP’s intolerance of opposition is well known across India. The party is known for its public shaming and ostracism of intellectuals. It believes in blind support,” said Goswami.

There are many like Goswami who are out in the open to checkmate the BJP and its leaders from entering the artistic space because they feel the right wing party lacks both “intellect and culture” and cannot offer an alternative in the state. Consider the case of Bengal Minister Bratya Basu who told journalists in Kolkata on January 28, 2020, that the TMC was culturally oriented to drive a state known for its artistic temperament. “Can you name a writer, a poet, or a theater artist who has joined the BJP?”

Basu said that he feels proud that Bengal CM Mamata Banerjee spent a little over Rs 100 crore during the last five years to promote art and culture in the state. “I do not see the BJP doing something like this in Bengal. BJP is not known for culture, and intellect,” said Basu.

CM Mamata Banerjee has asked the state’s artistic fraternity to back her party, leading the charge of the TMC show are a bunch of actors like Dev, Mimi Chakraborty, Nusrat Jahan and Shatabdi Roy (all MPs) who will now do daily street corner meetings and attend rallies to highlight why it is important for Bengal to seek culturally oriented people to rule the state.

The cultured-uncultured, intellectual-unintellectual debate is, in many ways, spiralling out of shape in the state where the film industry—unlike its recent claim of being totally independent of any political alliance—is totally under the grip of the TMC, and its powerful leaders, brothers Arup and Swarup Biswas.

The duo, claim many in Kolkata, control the all powerful Cine Technicians & Workers of Eastern India (FCTWEI) which, in turn, controls the Bengal film industry. The FCTWEI’s alleged vice-like grip on the state’s film industry has often troubled many filmmakers but they have not raised their voice in the fear of being isolated and humiliated.

Film industry insiders say the FCTWEI is a powerful body which allegedly interferes into the working of the filmmakers and actors, even camerapersons and editors. And it is apparently happening not just in the film industry, it is happening in the state’s theatre fraternity as well.

There have been several occasions when film units from outside Bengal have returned because of demands from FCTWEI.

Are you an intellectual, are you not?

The FCTWEI have weird demands, every movie shot in Bengal needs to be routed through the body. The FCTWEI allegedly pushes a large number of their members even if the director does not need them. New producers and directors are often harassed. If the directors protest, the cinema halls drop their movies.

“It is a deadly cycle,” said a film industry insider.The person, who spoke on conditions of anonymity, said there had been several occasions when shootings were held up because of such unreasonable demands. He further said there were special cards which had been allegedly distributed to those close to the TMC.

“But, you cannot complain. If you do, you will outcast. Criticism of the ruling government has severe repercussions in Bengal. Any defiance leads to cancellation of assignments,” says actor Koushik Roy who recently joined the BJP.

Roy said the culture debate and that of an artist’s creative independence was totally misplaced because the Tollywood top brass had routinely aligned with the TMC.

“Why ask me? Ask those who work in the industry, and they will tell you what happens if you take on the state government. The BJP is not pushing any cultural agenda, the party is talking of governance. The slogan Didike Bolo (Tell Didi) explains the TMC has not been in touch with the masses. First let us talk about good governance and then we will discuss culture,” said Roy.

Many tend to agree. Left-leaning filmmaker Anik Dutta’s movie Bhobhishyoter Bhoot was pulled out of movie halls in 2019 after the director said he was unhappy to see too many posters of CM Mamata Banerjee at the venue of the Kolkata Film Festival.

“Free speech cannot be gagged for the fear of the mob,” the court said, expressing concern over “growing intolerance” in society against artistic freedom.

“And yet, it is the TMC which wants to describe the BJP as a party full of philistines and roughnecks. All TMC has done is to extend its grip on the film industry and all art and cultural events so that it can pamper the stars and eventually use them for political purposes,” says BJP Rajya Sabha MP Swapan Dasgupta.

Dasgupta told, he was surprised to see this clarion call from a section of the film and theatre artists to clean the industry of politics. “But for all these years,, weren’t these very stars part of the ruling party and enjoyed the party’s patronage? Why change the narrative now and paint us in the red?”

Political cognoscenti in Kolkata say the artist fraternity has always been under the influence of the ruling party in the state. When the Left Front ruled Bengal for over three decades, many actors and directors openly aligned with the red brigade.

The legendary Satyajit Ray’s Hirok Rajar Deshe or the Kingdom of Diamonds, was produced by the West Bengal government with a strong political message. The 1980 movie was a sequel to the 1969 fantasy adventure film Goopy Gyne Bagha Byne. Many movies and plays which followed the Marxist ideology were produced during the Left Front rule in Bengal. And now, claim political observers, the industry is almost aligned with the TMC.Probably encouraged by the TMC, many have taken to the social media to say the state’s cultural and artistic temperament could be reduced to dust if the BJP assumes power. Some took to Facebook to say how the right wing party would replace the Rabindra Bhawan with a huge Hanuman temple.

“They are sending out some wrong signals to the people in Bengal, and hoping some of this will eventually stick. TMC’s mindset needs to change. The artist fraternity is now clamouring for attention saying their independence would be compromised. Were they actually independent all these years?” asked Dasgupta.

But the divide is clear and many of the stars continue to heap scorn on BJP leaders. “I am aware of what the actors said at the rally. This is nothing but some fatuous, self-important drivel that will not lead the TMC anywhere. I may not be in cinema but I am educated. I know the realities of life, the crisis that has engulfed the nation post the pandemic. And here I see a debate emerging on who is and who is not an intellectual,” says BJP leader Anupam Hazra.

But TMC is unfazed. It continues to tell people in Bengal that the BJP will upset the state’s artistic temperament if voted to power.

Will that actually happen? Will the Hindutva agenda of the BJP override Bengal’s creative temperament? Union minister Babul Supriyo offers a brilliant counter. “I hear these arguments over culture, art, Rs 100 crore for theatre and who is an intellectual and who is not and then I look around.