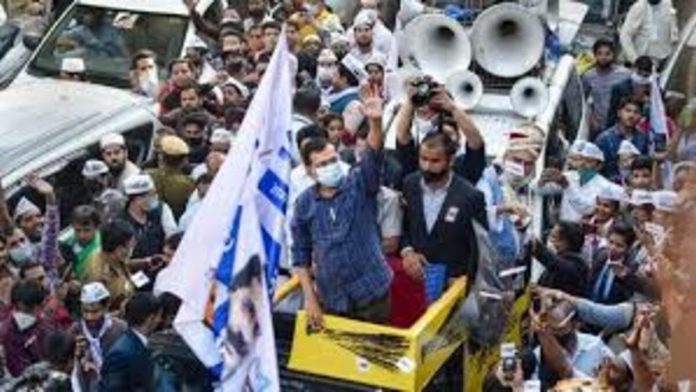 The Delhi government decided in January to build up a Neki Ki Deewar (kindness wall) outside state-run schools to encourage individuals to donate daily necessities to the less fortunate.

“A few days later, we discovered that the BJP had launched a WhatsApp whisper campaign alleging that Arvind Kejriwal was erecting Islamic structures outside government schools.” Simply because the Urdu words neki and deewar were used. “Can you believe the scope of the polarisation project?” questioned a top leader of the Aam Aadmi Party (AAP).

To fight “continuous attempts” to label the AAP as “pro-Muslim,” the party has adjusted its tactics away from religious devotion and toward a more combative approach. Though the AAP has been accused of soft-pedaling communalism in recent years and has faced criticism from a variety of quarters for its ambiguous stance on issues ranging from the Shaheen Bagh sit-in to the northeast Delhi riots, its statements during the demolition of Jahangirpuri last month and the loudspeaker issue were unusually vehement.

The AAP demonstrated incoherence in defining their strong attitude on the loudspeaker debate, which became a hot-button issue in Maharashtra after Maharashtra Navnirman Sena (MNS) head Raj Thackeray’s comments at a public meeting on April 2. Initially, the party stated that it would reject any attempt to remove loudspeakers from religious buildings, claiming that the BJP had no right to meddle with “our faith.” It later changed its mind, saying that it agreed “in principle” with the idea of eliminating loudspeakers from all religious institutions and places of worship. Deputy Chief Minister Manish Sisodia said on Wednesday that the BJP should make the request to the Delhi Police because peace and order in the national capital is under the control of the Centre.

The AAP originally used the bogey of “Rohingya and Bangladeshis” during a demolition drive by a BJP-led civic council in Jahangirpuri on April 20, but afterwards shifted its focus to the illegitimacy of the process, stating that it was the BJP’s attempt to extort money from residents.

“Our detractors claim we are legitimising the BJP’s narrative,” an AAP official stated. “What they fail to see is that it has already been legitimised.” Despite what a small group of people who are removed from reality would have us believe, a big portion of society is buying into that story. They have no idea how many people are interested in the BJP’s story. It is impossible to combat the BJP without acknowledging the potency of its story.”

“The BJP has persuaded people that Bangladeshis and Rohingya have infiltrated the country and are provoking riots,” another AAP representative reasoned. We couldn’t have confronted the BJP without evoking this story in this situation. But we never claimed that the violence was sparked by the Rohingya or Bangladeshis. We simply stated that, if the BJP’s claims are accurate, aren’t they accountable for allowing these communities to settle in India? Furthermore, we are always claiming that the BJP is behind every riot in the country because it benefits them.”

The BJP presented the results of a “survey” on Wednesday, claiming that 91% of 11.54 lakh respondents labelled the BJP as the party responsible for “thuggery and rioting in the country.”

Is the AAP, though, at risk of alienating Muslim voters? The party’s leadership and Muslim faces believe that the minority community, which makes up roughly 13% of Delhi’s population according to the 2011 Census, has no choice but to stick with it.

“The country has two options: religion-based politics and rioting, or work-based politics. “The AAP stands for the latter,” said a Muslim senior AAP leader, echoing the party’s official policy, which emphasises the economic implications of communal disputes over their impact on rights and freedoms.

The AAP’s confidence is based on the notion that Muslims have no viable political options. “And, in any event, where will they go?” The Congress is in shambles. Will they take Owaisi’s side? Muslims are well aware of who is working in their favour, according to the AAP leader. In the 70-member Delhi Assembly, five of the party’s 62 MLAs are Muslims. They represent the Okhla, Seelampur, Mustafabad, Ballimaran, and Matia Mahal constituencies.

Another AAP representative claimed that during the 2019 Lok Sabha elections, the Muslim community abandoned the party. “A substantial portion of the population had mixed thoughts about us in the 2020 Assembly elections, but they witnessed what happened in 2019 and voted for us.” Later, during a civic by-poll, a Congress councillor was elected from a Muslim-dominated ward, but the BJP was not running in that ward. Muslims have realised that they are in the midst of an existential crisis. They will back the party that has the best chance of defeating the BJP.”