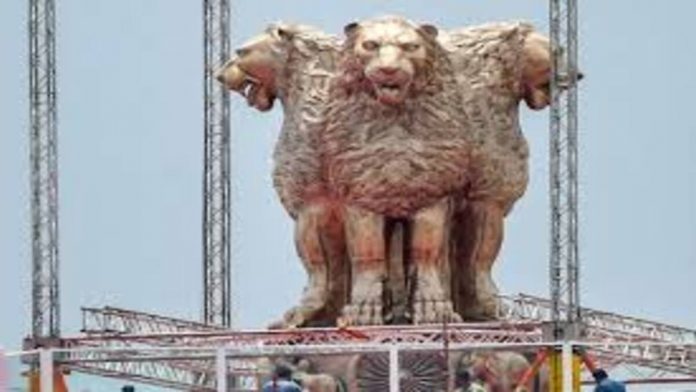 The new National Emblem sculpture atop the new Parliament building in New Delhi has drawn criticism from opposition lawmakers and activists who claim it is too aggressive, snarling, and disproportionate in comparison to the original.

The government is being accused by the opposition of twisting the national anthem in order to force a reform.

The new national insignia that the government has placed atop the new Parliament building has drawn criticism from the Congress, Rashtriya Janata Dal (RJD), Mahua Moitra of the Trinamool Congress, and others.

Please look at the lion’s face to see whether it represents the Great Sarnath monument or a warped depiction of the GIR lion, Narendra Modi Ji. The leader of the Congress in the Lok Sabha, Adhir Ranjan Chowdhury, requested that people check it out and, if necessary, fix it.

In the presence of Lok Sabha Speaker Om Birla and Rajya Sabha Deputy Chairman Harivansh, Prime Minister Narendra Modi had unveiled the cast of the national emblem atop the new Parliament building on Monday.

Modi had come under fire from the opposition for violating constitutional guidelines and omitting to invite opposition leaders to the event.

“The original logo has a benign expression, but those erected during Amrit Kaal reflect a man-urge eater’s to consume everything in the country,” Lalu Yadav’s RJD said in a statement criticizing the administration.

insult to the magnificent Ashokan Lions, our country’s mascot. On the left, the original is elegant and regally self-assured. The version on the right is Modi’s, and it is growling, needlessly hostile, and disproportionately placed atop the new Parliament building. Shame! Jawahar Sircar, a Rajya Sabha member of the Trinamool Congress, posted two separate photographs of the national anthem on Twitter, demanding that it be changed right away.

Without saying anything, Mahua Moitra also tweeted a comparison of the two national anthems.

The national flag that was hoisted atop the new Parliament building also drew criticism from historian S Irfan Habib.

“Tampering with our national anthem was completely avoidable and unnecessary. Why should our lions appear fearsome and distraught? These are the lions from Ashoka that independent India modified in 1950, according to Habib.

“From Gandhi to Godse; From our national emblem, which features majestic lions resting quietly, to the new national emblem announced for the top of the new Parliament building under construction at Central Vista; Angry lions with bared fangs. Prashant Bhushan, a senior attorney and activist, declared that this was Modi’s “new India.”

Congressman Jairam Ramesh also tweeted, calling it “a flagrant affront to India’s National Symbol” to radically change the character and behavior of the lions on Ashoka’s pillar at Sarnath.

Speaking in the midst of the debate, former ASI ADG BR Mani claimed, “The Ashika Pillar, which was discovered in 1905, was duplicated and installed atop India’s Parliament House. Will not dismiss the validity or significance of the accusations made by opposition leaders, but it is improper to comment politically on them.

“This is around 21 feet tall, compared to the original pillar’s 7-8 feet. With such a gap, perspective is altered. Angle appears differently when viewed from the ground, but when viewed from the front, it is obvious that a considerable effort has been made to reproduce it, he continued.

Hardeep Singh Puri responded to criticism of the new National Emblem’s design on the new Parliament building by saying, “Sense of proportion & perspective. The perception of beauty is well known to depend on the observer. The same is true of calm and fury. The New Parliament Building’s symbol is enormous at 6.5 meters high compared to the ancient Sarnath Emblem’s 1.6-meter height.

When comparing the two constructions, “one needs to grasp the impact of angle, height, and size,” he continued.

“The Sarnath symbol would appear as peaceful or agitated as the one under discussion if viewed from below. There would be no difference if the Sarnath insignia was enlarged or the emblem on the new Parliament building was shrunk to that size, according to the Union Minister.