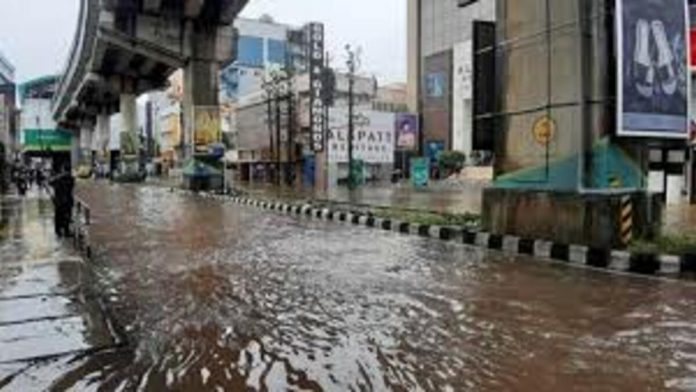 The abrupt deluge caused by a strong westerly wind flow from the Arabian Sea to South Peninsular India in lower tropospheric levels is expected to continue for the next four days over Kerala and Lakshadweep, according to an official bulletin from the India Meteorological Department (IMD).

On Monday, a red alert was issued in five districts and an orange alert was issued in seven districts, warning of excessive and very heavy rains. At 8.30 a.m. on Sunday, Kodungallur in Thrissur received a whopping 20 cm of rain, the highest amount of rain in the last 24 hours. During the same period, Aluva and Irinjalakuda experienced heavy rainfall of 19 cm and 16.7 cm, respectively, while the catchment areas of the Neyyar dam in Thiruvananthapuram received 17 cm.

Three fisherman were rescued by the Indian Coast Guard (ICG) off the coast of Thengapattanam, close the Tamil Nadu border, after setting out from Vizhinjam. The ICG launched search and rescue efforts as soon as it got the distress call, and the missing fisherman were discovered off the coast of Thengapattanam. Within one and a half hours, ICG Ship C-427, which was pressed into service, will arrive at Vizhinjam jetty with fishermen. On arrival, Mohammed Haneefa (57), Anwar (43) and Meera Sahib (52) were transported to the Community Health Center in Vizhinjam for medical attention.

The southwest monsoon is expected to advance into the South Andaman Sea, Nicobar Islands, and neighbouring Southeast Bay of Bengal during the next 24 hours, according to an IMD statement issued on Sunday midday. Furthermore, a cyclonic circulation extends up to medium tropospheric levels across South Interior Karnataka and its environs.

During the following five days, it is quite likely to remain over the same region with a modest northward trend, increasing rain activity in Kerala. According to the Kerala State Disaster Management Authority, fishing along the Kerala coast has been halted until further notice.