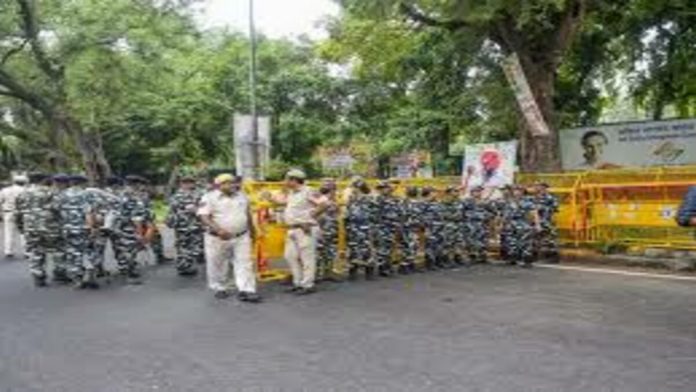 Following the sealing of the Young Indian Limited office in the National Herald building by the Enforcement Directorate, police have been stationed outside the Congress headquarters in New Delhi. The Congress condemned the closing of access routes to party headquarters, claiming that this has started to happen more frequently than not.

To avoid any unexpected situations, the Delhi Police claimed to have increased security close to the party’s headquarters in the capital. The issue of police presence outside party offices will be brought up in Parliament on Thursday, according to the Congress.

The Congress criticized the move made by the Center and tweeted, “The voice of truth won’t be intimidated by police security. Gandhi’s supporters will struggle and overcome this evil. The dictator’s dread and rage are shown by sealing the National Herald office and placing the Congress headquarters under police security. However, concerns about unemployment and inflation will continue to be raised.”

Jairam Ramesh, a senior in the Congress party, criticized the police for blocking the party headquarters, saying, “Delhi Police obstructing the route to AICC Headquarters has become a rule rather than an exception! It is surprising why they merely acted in this way.

Outside of Sonia and Rahul Gandhi’s residence in the capital, security has also been stepped up.

Sonia Gandhi and Rahul Gandhi, two leaders of the Congress, had previously been questioned by the Enforcement Directorate in relation to a case involving money laundering and the National Herald newspaper. The claim of alleged financial irregularities in the Congress-promoted Young Indian Private Limited, which owns the National Herald newspaper, was the subject of the interrogation.

Changing Congress Headquarters and 10 Janpath into a Police cantonment is an undeclared emergency, according to Rajasthan Chief Minister and Congress leader Ashok Gehlot. The office of the National Herald (Young Indian) was forcibly sealed. The entire nation would be forced to bear the brunt of it if the populace does not join behind the Congress in opposition to this totalitarian NDA regime.

Salman Khurshid, the leader of the Congress, declared that the National Herald money laundering case “holds no ground” after the ED sealed the Young Indian Limited premises.

On Thursday at 10 am, the Congress Parliamentary Party office will host a meeting of all of its Rajya Sabha and Lok Sabha MPs.

The Congress will bring up in Parliament tomorrow the issue of Delhi Police deployment outside party offices.

On Wednesday night, Rahul Gandhi came back to Delhi as security was tightened around his and Sonia Gandhi’s apartment. Rahul Gandhi has got back to the nation’s capital after a two-day trip in Karnataka.