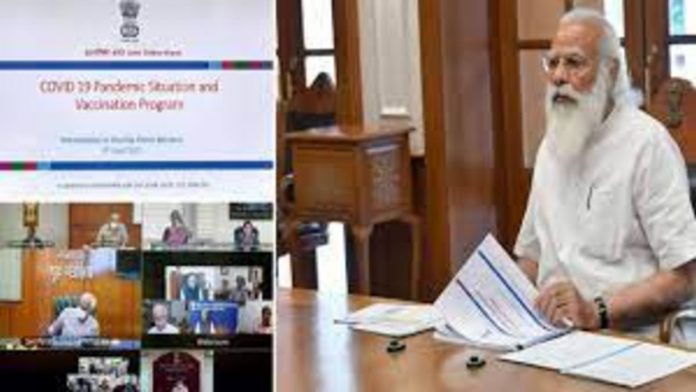 The Prime Minister’s office at the end of a meeting on Sunday said that the Central teams of public health officials and clinicians will be sent to Maharashtra, Chhattisgarh and Punjab because of the high surge in Covid-19 cases and irregular deaths. The meeting was chaired by Prime Minister Narendra Modi with other senior officials including the Principal Secretary to the Prime Minister, the Health Secretary and the Cabinet Secretary.

The major reason behind this steep rise in Covid-19 cases might be the leniency in following the Covid-appropriate behaviour — mainly the wearing of masks and the social distancing, said the PMO in a statement.

“While the exact contribution of mutant strains in the surge in some states remains speculative”, the measures to control the pandemic remain the same”, the statement further read. In a view of the current situation it was also decided in the meeting that the measures to curb the virus will further be strengthened.

However, the Delhi’s AIIMS (All India Institute of Medical Sciences) Chief and a chief member of government’s Covid Task Force said the new variants might be partly responsible for this steep surge. He also suggested some key measures to curb that included declaring containment zones, ramping up testing, tracing, isolation and lockdowns were the key measures suggested by Dr Guleria.

Meanwhile, Maharashtra government on Sunday declared that it will impose a range of restrictions including night curfew in the most affected parts of the state. The state is responsible for 57 per cent of total cases and 47 per cent of deaths in the country for last 14 days.

The “five-fold strategy of Testing, Tracing, Treatment, Covid-appropriate behaviour and Vaccination if implemented with utmost seriousness and commitment, will be effective in curbing the spread,” said the Prime Minister’s office.

“A special campaign for Covid appropriate behaviour with emphasis on 100% mask usage, personal hygiene and sanitation at public places/workplaces and health facilities will be organised from 6th April to 14 April 2021,” read a further statement by PMO.

The country has been reporting a continuous rise in daily cases for last few weeks. More than 1 lakh cases are reported which is the highest since the pandemic begin.