Has BJP Took Action Against Nupur Sharma And Naveen Jindal To Retain Focus On Development? 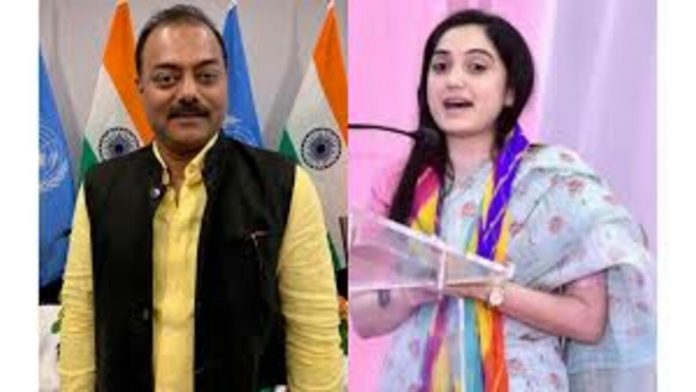 While some members of the BJP defend former BJP officials Nupur Sharma and Naveen Kumar Jindal, others believe the action taken against them is justified because of their provocative remarks about Prophet Muhammad. This group says the party intended to send the message that “growth is its major motto” and that no one should cross the “Lakshman Rekha” by punishing the two for their “out of turn outbursts.”

On the condition of anonymity, some top BJP leaders told News Agency that the party took action against Sharma and Jindal to retain the NDA government’s focus on development matters.

According to a BJP national spokesperson, the BJP-led NDA government at the Centre is working hard to preserve its focus on development. “The dominant mantra is development, but a number of leaders appear to be crossing the Lakshman Rekha.” When Muslim netas say something, their BJP equivalents fall for it and become enraged. There is a form of competitive communalism at work. When a Muslim neta says something, we retaliate with worse language. To prevent problems, we should all speak just about development matters,” he stated.

Mohan Bhagwat, the RSS chief, he said, had also struck a conciliatory tone. “For example, Bhagwat ji said that the shivling’ unearthed in Banaras’ Gyanvapi mosque involved religious themes. However, he cautioned against hunting for a shivling’ in every mosque?”

The BJP’s spokeswoman thanked the party’s leadership for “drawing the line” for party officials and workers. “This is also a message to other political parties,” he continued, “that the BJP does not believe in poisoning the atmosphere.”

He did, however, criticize AIMIM President Asaduddin Owaisi and Muslim radicals for “beginning and supporting competitive communalism,” as he put it. “Nupur Sharma’s remarks were uttered in the heat of the moment in response to persistent provocation from Muslim speakers during a TV debate.” “However, Muslims have no right to threaten her or demand for her assassination,” he added.

Nupur Sharma was suspended and Naveen Jindal was expelled from the BJP for “making offensive statements against Prophet Muhammad,” according to a senior BJP official close to Union Home Minister Amit Shah.

Though the BJP was committed to cultural nationalism, the functionary stated that it could not come at the expense of development and good government. During the Uttar Pradesh assembly election earlier this year, he continued, there were various provocations, but the BJP made sure that the focus remained on governance issues like free ration, housing, self-employment, electricity, water, and toilets.

Ayushman Bharat (health) and similar initiatives. “While the Ram Mandir in Ayodhya was a contentious topic, the main planks of gareeb kalyan, sewa (service), and sushasan (good governance) maintained,” he remarked.

The BJP-led administration, according to a senior member of the BJP Mahila Morcha, is concerned of its image and wants to be perceived as obeying the Constitution in letter and spirit. “Prime Minister Narendra Modi ji has a balanced approach to life. He should be followed by ministers and BJP officials, she urged.

“The BJP’s primary principle is sabka saath, sabka vikas.” We have mutual respect for one another’s religious beliefs. Even atheists are treated with respect. She went on to say that the Nupur Sharma-Naveen Jindal incident is unwelcome.

“A number of right-wingers may have sympathized with and supported Nupur Sharma and Naveen Jindal, but a section of BJP officials has justified the action against them and claimed it was the need of the hour,” she continued.