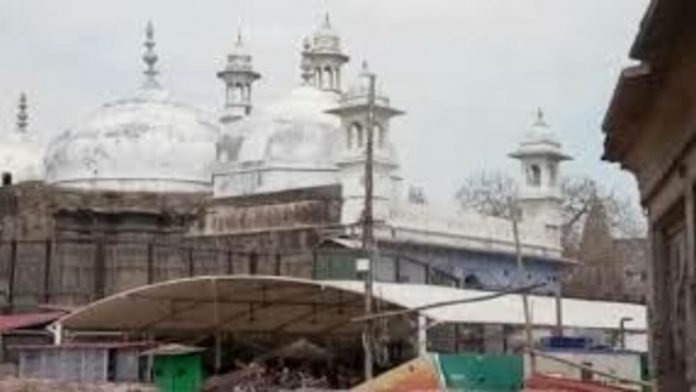 Lawyers for Hindu devotees urged the Supreme Court Monday to dismiss the plea brought by the Gyanvapi mosque committee in Varanasi, which challenged the filming inside the mosque.

The Supreme Court had previously served notice on the Hindu side and the Uttar Pradesh government in response to the mosque committee’s petition, which also accused the Varanasi court-appointed commissioner of bias.

The Hindu devotees’ lawyers argued in their written answer that the property has belonged to Lord Adi Vishweshwar since long before the Islamic dominion in India, and that it was taken by force by Aurangzeb.

The Varanasi court also received the report of the recording that took place inside Gyanvapi mosque on May 14, 15, and 16.

They claim that Aurangzeb, as a sovereign, issued the order to demolish the temple, and that the land does not belong to any Muslim, Muslim entity, or Waqf board.
Only Waqf land can be used to build a mosque. Aurangzeb did not establish any Waqf in this case. As a result, the claimed Gyanvapi mosque is nothing more than a construction that cannot be considered a mosque.
Lord Adivisheshwar, Goddess Shringar Gauri, and other Hindu deities found on the property have previously been worshipped.
Thousands of worshippers walk around the Parikrama Marg, and on certain occasions, lakhs gather to perform religious ceremonies.
Hindu law recognises circumambulation around the god as an important aspect of worship.

On May 17, the Supreme Court ordered the Varanasi district magistrate to secure the protection of a location inside the Gyanvapi-Shringar Gauri complex where a ‘Shivling’ is reported to have been discovered during filming, allowing Muslims to offer ‘namaz’ and perform “religious observances.”

The civil judge (senior division) of Varanasi ordered the mosque to be filmed on April 18, 2021. A petition filed by five Hindu women in Varanasi claims that the Gyanvapi mosque complex contains idols of Hindu gods and goddesses.

The original complaint was filed in the Varanasi district court in 1991 for the restoration of the ancient temple on the site of the Gyanvapi mosque.