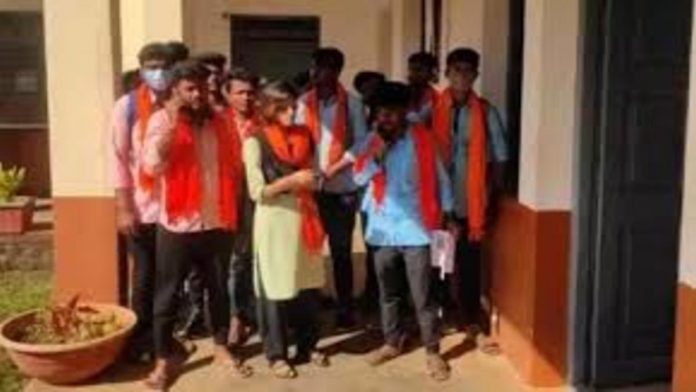 Saffron scarves were worn by a group of college students in Karnataka’s Koppa district in protest of permitting Muslim women to wear hijab in the classroom.

Saffron scarves might be worn indoors if hijab was allowed, according to students at the government-run college in Balagadi hamlet. The same pupils had previously requested that women not wear hijab to class.

Three years ago, a similar circumstance arose, and the college administration intervened to resolve the problem. A meeting with parents and teachers has been scheduled for this week to discuss the matter. When the hijab controversy erupted, the college had permitted all students to wear whatever they wanted.

“Everything was well until yesterday, when some students entered in class wearing scarves. They were protesting some students’ dress code “The college’s principal, Ananth Murthy, was quoted by a news agency as stating.

Muslim girl students at the state-run PU College in Udupi, Karnataka, were allegedly denied access into the classroom for wearing hijab in a similar event.