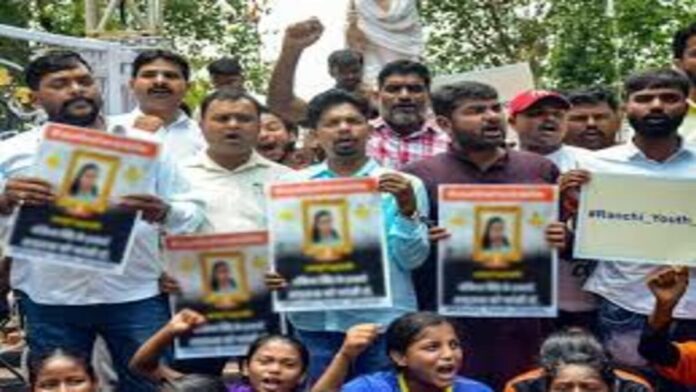 In Jharkhand’s Dumka, a 16-year-old girl who was allegedly set ablaze by a stalker last week was cremated on Monday morning under the watchful eye of the district administration. The state government also promised financial assistance to the girl’s family and promised a swift trial in the matter.

The Class 12 student was allegedly set on fire in her bed at around 4.30 am on August 23 by a neighborhood kid named Mohammed Shahrukh, sparking considerable outrage and street demonstrations over the crime’s nature. In her last testimony to the police, the girl claimed that Shahrukh, a man in his early 20s, had been stalking her for months and had also threatened her the day before the incident.

He was pressuring her into speaking with him. Even a day before the incident, he was able to obtain her phone number and threaten her, according to her grandfather.

On August 23, the girl reported to the authorities that Shahrukh had lit her on fire by throwing combustible material at her from the window. Her family members brought her to the Phulo Jhano Medical College and Hospital in Dumka after hearing her cries for assistance, where the police took her statement. Then, with about 45% burn injuries, she was sent to Ranchi’s Rajendra Institute of Medical Sciences (RIMS).

On Sunday, she died as a result of her wounds.

“According to her testimony given to the magistrate, Shahrukh was taken into custody that day and charged in accordance with the appropriate IPC provisions. During the course of the investigation, Naeem Khan, also known as Chotu Khan, also surfaced. He was taken into custody by the court after being arrested today. They would both be charged with murder. According to Dumka Superintendent of Police (SP), Amber Lakra, who has been given the go-ahead by superiors to personally oversee the investigations in the case, “We will file the charge-sheet in the case shortly and ensure fast track trial and severe possible punishment to both the offenders.”

In Dumka town, the girl’s killing generated considerable indignation, leading to a number of street demonstrations and candle-lit marches calling for the accused to be put to death. The district government made sure that the cremation was conducted quietly on Monday under police protection by clamping down Section 144 of the CrPC on Sunday night as unrest in the town was at an all-time high. SP Amber Lakra and Deputy Commissioner Ravi Shukla attended the cremation in person.

My granddaughter’s grandma declared, “The only way justice could be served to her is if I saw the guilty being hanged to death.

The event also provoked intense political responses, with the Bharatiya Janata Party (BJP), the opposition party, blaming the Hemant Soren government of not doing more to save the girl’s life and casting doubt on senior police officers’ handling of the matter.

“Love Jihad is manifestly at work here. However, the government was preoccupied having a picnic with MLAs and paid no attention to the girl fighting for her life in the hospital. In contrast, the state government airlifted an accused man named Nadeem in the recent Ranchi violence case, and they are paying for his medical care. However, after the victim was set ablaze in her home, no one from the administration even made the effort to visit her and her family, according to former chief minister and current BJP vice president Raghubar Das.

There are rumors that the defendant is being defended by DySp Noor Mustafa, who mistook the deceased’s age for a major when she was actually a juvenile. Since justice cannot be upheld while such police officials are on the job, I demand that CM Hemant Soren take action against them, according to BJP legislator Babulal Marandi.

Dumka SP Amber Lakra responded to the accusation by saying that the age-related problem has been fixed. Regarding her age, there was initially some ambiguity. But it was discovered throughout the investigation that she is a minor. The POCSO (Protection of Children from Sexual Offenses) Act’s pertinent clauses would now also be included in the FIR, Lakra continued.

In the meantime, under pressure about the occurrence, the state government promised the family 10 lakh in monetary compensation in addition to a prompt trial.

“Such individuals should not be pardoned; instead, they should face the worst penalties. Laws that tighten the already-existing regulations for these situations should be introduced. In our culture, there are many wicked deeds. The law is following its course in this tragic occurrence. The defendant was taken into custody. We are working to get him punished as soon as possible,” stated chief minister Hemant Soren.

The chief minister further said that the case has been given the go-ahead to move quickly and that a police official with the rank of director general (ADG) has been tasked with providing a status report on the case’s ongoing investigation.

After hearing about the event, governor Ramesh Bais called DGP Neeraj Sinha and asked him to investigate the involvement of local police officers in the case as well as provide a financial contribution of 2 lakh from his discretionary funds, according to a statement from Raj Bhawan.

The governor also phoned the father of the girl to offer his sympathies.

Such heinous deeds are despicable. Such crimes damage the state’s reputation. Even at home, in their place of business, or in a shopping center, people are feeling uncomfortable. The DGP has already received instructions to strengthen law and order, but we haven’t noticed any progress,” the governor claimed.

In the meantime, the Dumka event was brought to the attention of the National Commission for Women (NCW).

We requested the action taken report from the Jharkhand DGP because an arrest had already been made. There is a mentality that says you should compel a woman to marry you and, if she declines, burn her alive. This mentality is sad. This should be discussed, according to NCW director Rekha Sharma.