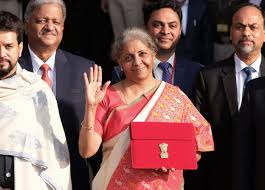 is it a good revival plan ?

Finance minister Nirmala Sitharaman on Monday presented the first-ever digital Union Budget. She announced higher capital expenditure for the FY 2021-22 and focused on providing a major boost to healthcare and infrastructure building.

In her budget speech, Sitharaman mentioned that this year’s budget focused on six pillars- health and wellbeing, physical and financial capital, and infrastructure, inclusive development for aspirational India, reinvigorating human capital, innovation and R&D and minimum government and maximum governance

The finance minister stated that India’s fight against Covid-19 continues into 2021 and that this moment in history, when the political, economic, and strategic relations in the post-Covid world are changing, is the dawn of a new era — one in which India is well-poised to truly be the land of promise and hope.

India currently spends about 1% of GDP on health, among the lowest for any major economy.

Prime Minister Narendra Modi said the budget was aimed at creating “wealth and wellness” in a country that is battling the world’s second highest coronavirus caseload after the United States.

Assam, Tamil Nadu, Kerala, West Bengal and Puducherry are scheduled to go to assembly polls in April-May this year.

Half of agriculture budget to be spent on PM-KISAN scheme

The agriculture and farmers’ welfare ministry received 5.63 per cent more budget allocation at Rs 1,31,531 crore for 2021-22 and half of it would be spent on the flagship PM-KISAN scheme and slightly higher funds are made available for agri-infra fund and irrigation programmes.

“The MSP regime has undergone a change to assure price that is at least 1.5 times the cost of production across all commodities. The procurement has also continued to increase at a steady pace, this has resulted in an increase in payment of farmers, substantially,” the finance minister said.

No major increase in defence budget

There was no big bang increase in the overall defence budget, but India did spend an additional unbudgeted Rs 20,776 crore on emergency arms procurements in the current fiscal in face of China’s ongoing belligerence on the northern borders, especially in eastern Ladakh.

Centre’s borrowings and liabilities has been the highest source from which money has come into the economy. Hard-pressed for funds, the government resorted to borrowing more in order to uplift a sluggish economy through spending boost.

Besides, GST and income tax collections have also been a major source of revenue for the government in the past year.

Senior citizens above 75 years of age with only pension and interest incomes have been exempted from filing tax returns, the finance minister announced.

While tabling the Union budget 2021-22 in Parliament, the minister said that the number of income tax return filers has increased to 6.48 crores now from 3.48 crores in 2014.

Sitharaman said serious tax offences of concealment of income of over Rs 50 lakh can be reopened even after 10 years.

The finance minister also announced to constitute a dispute resolution for small taxpayers that will be faceless to ensure efficiency, transparency and accountability. Anyone with a taxable income up to Rs 50 lakhs and disputed income up to Rs 10 lakhs shall be eligible to approach the committee, she said.

The government capital expenditure as a proportion of GDP is set to pick up from 1.7 per cent in FY20 to 2.3 per cent in FY21 and further to 2.5 per cent in FY22, which will be a 17-year high figure and will enhance medium-term growth prospects.

Finance minister Nirmala Sitharaman said the government estimates fiscal deficit of 6.8 per cent of the gross domestic product (GDP) in the next financial year beginning April 1.

However, the fiscal deficit in 2020-21 is estimated to soar up to 9.5 per cent due to rise in expenditure on account of the outbreak of Covid-19 and moderation in revenue during this fiscal year.

The lockdown to check the spread of virus adversely impacted the economic activities resulting in contraction in the economy by an estimated 7.7 per cent.

For the current fiscal year, the government had earlier pegged the fiscal deficit of 3.5 per cent.

Expressing commitment to augment the country’s infrastructure, the finance minister proposed to significantly enhance capital expenditure to Rs 5.54 lakh crore in the next fiscal, besides creating institutional structures and giving a big thrust to monetizing assets to achieve the goals of the National Infrastructure Pipeline (NIP).

Sitharaman said NIP, that was launched in December 2019 with 6,835 projects, has now been expanded to 7,400 projects and around 217 projects worth Rs 1.10 lakh crore under some key infrastructure ministries have been completed.

Major increase in allocation of funds for metro connectivity

Strengthen MGNREGA with increase in minimum person days from 100 to 150 days. The government would be introducing the legislation this year to implement the setting-up of Higher Education Commission of India.

Union finance minister Nirmala Sitharaman further added that the Centre would work towards raising the share of public transport in urban areas through the expansion of metro rail networks and also announced two new technologies — Metrolite and MetroNeo for Tier 2 cities.

Package of coming up with a policy of strategic disinvestment of public sector enterprises, the minister said various sectors will come under it: atomic energy, space and defence; transport and telecommunications; power, petroleum, coal and other minerals; banking, insurance and financial services.

Fulfilling the governments’ commitment under the Atma Nirbhar Package of coming up with a policy of strategic disinvestment of public sector enterprises, the minister said various sectors will come under it: atomic energy, space and defence; transport and telecommunications; power, petroleum, coal and other minerals; banking, insurance and financial services.