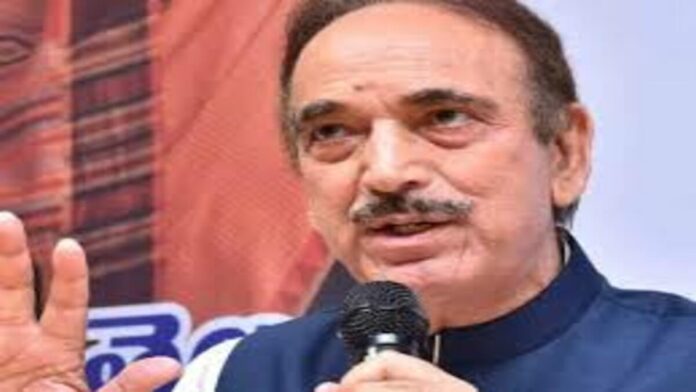 One of the tallest members of the Congress, Ghulam Nabi Azad, announced his resignation on Friday. He did so after launching a scathing attack on Rahul Gandhi, calling him out for his “childish behaviour,” “glaring immaturity,” and for allowing a “coterie of inexperienced sycophants” to run the party.

He blamed Sonia Gandhi’s son Rahul for the Congress’s loss in the 2014 national election, a turning point for the party that has since struggled to win elections, in a scathing five-page letter of resignation.

He claimed that the Congress is “completely wrecked” and has passed the point of no return and criticised a “remote control paradigm” in which Sonia Gandhi serves as “only a nominal figurehead” and Rahul Gandhi, or worse, his bodyguards and PAs, make crucial decisions.

The Congress has experienced several significant departures over the previous few years, but Mr. Azad, 73, is the most senior leader to leave. There are rumours that a different senior leader will step down soon.

A faction of the Congress has accused Mr. Azad, who was given the Padma Bhushan last year, of cozying up to the BJP and Prime Minister Narendra Modi, who calls him a close friend.

Mr. Azad, a member of the Congress for more than 50 years, dropped the bombshell while all three Gandhis were away.

In his leaving statement, Mr. Azad said that the reason the Congress had given political ground to the BJP and regional parties over the previous eight years was because the leadership had “tried to impose a non-serious individual” as party head.

Rahul Gandhi, who entered politics and was nominated vice president by you in January 2013, “unfortunately, destroyed the entire consultation structure that existed prior,” Mr. Azad wrote, noting that Sonia Gandhi had listened to senior leaders.

He claimed that all senior and knowledgeable party leaders had been removed, and a “new coterie of inexperienced sycophants” had taken over the reins of the organisation.

He claimed that Rahul Gandhi’s destruction of government property in front of the cameras was one of the most obvious signs of his immaturity.

In 2013, Rahul Gandhi humiliated his own Congress-led government and then Prime Minister Manmohan Singh by tearing up a contentious order or special order that exempted convicted lawmakers from disqualification. He referred to the order as “complete nonsense.”

“The Prime Minister and the Indian government’s authority were utterly undermined by this infantile behaviour. More than anything else, this one move led to the defeat of the UPA government in 2014, which had been the target of a campaign of smears and accusations by a coalition of right-wing groups and certain dishonest business interests “It was written by Mr. Azad.

Without holding back, Mr. Azad continued to outline the Congress’ downward trajectory over the past few years.

“The Congress has suffered humiliating defeats in both of the Lok Sabha elections since you took office in 2014, followed by Rahul Gandhi. Out of the 49 assembly elections held between 2014 and 2022, it came in last in 39 of them. Only four of the state elections were won by the party, and in six of those, it was successful in forming coalitions. Unfortunately, the Congress currently has power in just two states and only plays a relatively minor coalition partner in the other two.”

Since the 2019 presidential election, according to Mr. Azad, the situation has only become worse. “You took over as acting president after Rahul Gandhi resigned in a “huff” but not before denigrating all the senior party officials who have sacrificed their lives for the party during a meeting of the extended working committee. a role you’ve had for the last three years and still do today.”

The former chief minister of Jammu and Kashmir claimed that he joined the Congress in the 1970s, when affiliation with the party in his home state was still frowned upon.

Mr. Azad was a key figure in the G-23, or the group of 23 “dissenters,” who submitted a letter to Sonia Gandhi in 2020 demanding a total restructure of the company and a full-time, collective, and visible leadership.

He claimed that following that letter, he was attacked, demonised, and degraded.

According to Mr. Azad, the Congress has lost both the desire and the capacity to stand up for India’s interests “under the tutelage of the cabal” that controls it.

He predicted the next election for a new leader will be a “huge hoax” and that the “selected one” would only be a puppet on a string.

The former member of the Rajya Sabha claimed that the leadership should have engaged in a “Congress Jodo” exercise rather than a “bharat Jodo” campaign in which Rahul Gandhi will tour the nation.

The resignation of a top politician soon before the party’s significant “Bharat Jodo” campaign, which Rahul Gandhi will address, was deemed “very unfortunate” by the Congress.