Former India captain Sunil Gavaskar pointed that Cheteshwar Pujara's importance to the current Indian team is underrated, considering the hard work he does for his side. 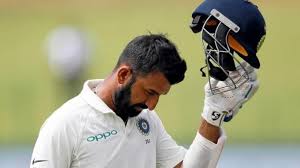 Former Cricketer and a batting champion Sunil Gavaskar thinks that Cheteshwar Pujara who he believes to be a test specialist is a the “glue who is holding the Indian batting together” is being underrated and his importance is also being undermined.

Pujara has the ability to make batting easier for the middle order and a capacity to win games for the country. He is given the title of ‘Wall 2.0’ because of his old fashioned way putting down the opposition bowlers.

“He gives solidity at one and it’s not just about frustrating the opposition. It encourages the stroke-players at the other end to play their shots without worrying about the whole team being dismissed because they know one end is held firmly by Cheteshwar Pujara. When you look at all those chases, even in Sydney when we almost made it when Pujara and Pant were together and even in Brisbane, it was Pujara’s solidity that allowed the stoke players to go and do what they do best,” told Gavaskar to Star Sports India.

Though Pujara wasn’t as productive with the bat as he was in India’s 2018-19 tour of Australia, but he was still India’s second-highest run-scorer of the recently concluded Border-Gavaskar series. Despite being the wall for their day five quests but he still got removed in Chennai by Jack Leach.

“A lot of time because of the fact they talk about the scoring rate and all that, his importance to the team is underrated. He is such a valuable member of the team. When a wicket falls early, he is there to make sure there are no further inroads. That is what makes Pujara such a special player. The Wall, the Rock whatever you may call him, he is the glue that holds this Indian batting together. Never forget that,” Gavaskar further said.