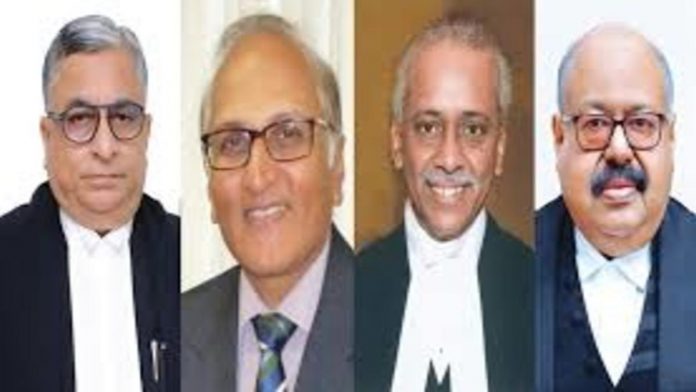 Chief Justice of India N V Ramana posed for photos with his colleagues as nine new Supreme Court judges were sworn in today.

This elevation is especially important because Justice Nagarathna will be the Supreme Court’s first female Chief Justice. She is the daughter of former Chief Justice of India E S Venkataramiah and will take over in September 2027.

This was also the first time nine judges took the oath of office at the same time.

The swearing-in event was place in the auditorium of the Supreme Court’s extra building complex, rather than the CJI’s courtroom, as is customary, to ensure Covid regulations.

“This is for the first time in the history of the Supreme Court of India when nine judges will be taking the oath of office in one go. In another first, the venue of the ceremony is shifted to the auditorium. This is done keeping in view the need for strict adherence to COVID norms,” said a press release issued by the top court’s public relations office.

With today’s appointments, the Supreme Court currently has 33 judges, including the Chief Justice, as opposed to the sanctioned number of 34.