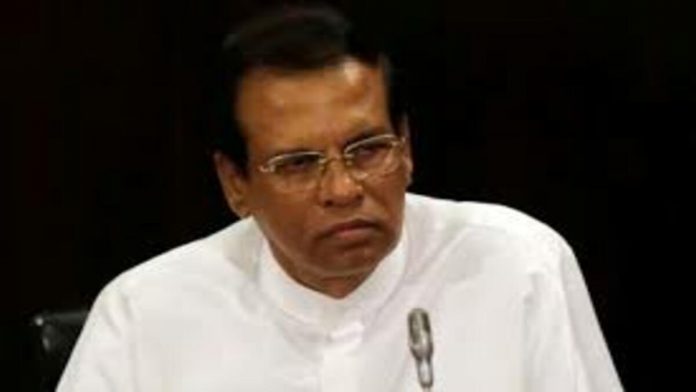 Former Sri Lanka President and Chairman of the Sri Lanka Freedom Party (SLFP) Maithripala Sirisena, speaking at a May Day rally organised by his party in Polonnaruwa on Sunday, called for new elections in the country.

According to Colombo Page, Sirisena said that politicians should take the side of the people at a time when the country is experiencing a huge tragedy, and that he took to the streets on International Labor Day to do so.

“I, too, took to the streets because this government refuses to quit, despite the fact that everyone from the country’s wealthiest to the poorest farmers and public officials have taken to the streets to demand that the government depart. In the country, I want to build a new government. We’ll make it happen “According to Colombo Page, Sirisena said.

The former president went on to say that he couldn’t stay at home when the people were in pain and the country was beset by thousands of difficulties.

“Farmers in Polonnaruwa who hoped to make the Moragahakanda Reservoir self-sufficient in agriculture are now unable to cultivate even on a daily basis. Today, I took part in a working-class May Day rally, which raised the voice of the farmers’ community and conveyed its difficulties and challenges to the country’s ruling class “According to reports, Sirisena said.

The former president further warned that if the current politicians remain in power, people will die at home, claiming that two or three lakhs of people in the country are already hungry and that he is receiving calls from people all across the country requesting food.

Sri Lanka is experiencing its greatest economic crisis since independence, with food and fuel shortages, increasing prices, and power outages affecting a large number of people, sparking widespread protests against the government’s response.

Foreign exchange shortages caused by a drop in tourism during the COVID-19 pandemic, as well as risky economic measures, such as the government’s decision last year to restrict artificial fertilisers in an attempt to make Sri Lanka’s agriculture “100% organic,” are blamed for the crisis.

Sri Lanka has defaulted on the entirety of its foreign debt, totaling around USD 51 billion, due to a severe lack of foreign exchange.

The economic condition has sparked widespread protests, with Prime Minister Mahinda Rajapaksa and President Gotabaya Rajapaksa being called to quit.